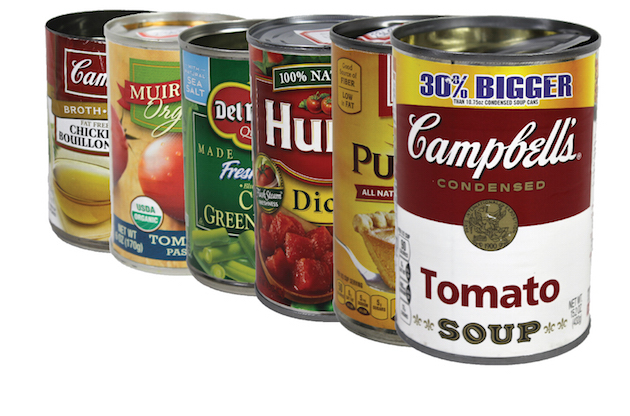 A new report released today by six nonprofit organizations that tested food can linings for the toxic chemical, Bisphenol A (BPA) found that two out of three cans tested have the toxic chemical in the lining.  BPA is an endocrine-disrupting chemical that negatively impacts our hormonal systems, contributing to a host of harmful health effects including breast and prostate cancer, infertility, type-2 diabetes, obesity, asthma and attention deficit disorder.

For the first time ever, this report also looked at the replacement materials for BPA in can linings, and to what extent – if any -- their safety has been studied.

The findings were alarming:

What about the alternatives?

The report found that retailers and brands who are phasing out BPA could be replacing it with regrettable substitutes. Identifying the safety of BPA alternatives is challenging, given the limited FDA review and approval of packaging additives and highly protected trade secrets in this product sector. However, the report found that:

The report includes numerous recommendations including:

Quotes from the report authors:

“Most people in the United States are exposed to BPA every day, largely from food packaging, despite the negative health impacts.  It shouldn’t be a buyer beware situation for shoppers every time they set foot in the canned food aisle,” said Janet Nudelman, director of Program and Policy for the Breast Cancer Fund. “Campbell’s and other major national brands need to get BPA out of food can linings and fully disclose the identity and safety of any BPA alternatives they’re using.  Only then will consumers be protected from the toxic effects of this hormonally active chemical and the likelihood of exposure to equally toxic alternatives.”

"Food manufacturers refused to tell us what chemicals were in their cans, so we reverse engineered and tested them ourselves," said Jeff Gearhart, MS, the Ecology Center’s HealthyStuff.org research director.  "Since they can’t hide these chemicals from consumers anymore, perhaps they will be more motivated to use safer materials.”

"BPA-free doesn't mean a can lining is safe, as the substitute could itself be harmful. That is why we are asking companies to take the GreenScreen Challenge and work with us to demonstrate the chemical safety of their can liners," said Clean Production Action’s Beverley Thorpe, who helps companies understand the value of the GreenScreen® for Safer Chemicals as an essential tool for replacing toxic chemicals with safe alternatives.

"The fact that most of our food cans contain endocrine-disrupting BPA means that most of us are regularly eating food contaminated with the hormone-mimicking chemical,” said Maggie MacDonald, Toxics Program manager at Environmental Defence Canada. “This is very disconcerting since those rely on canned foods in their diets are at continuous risk of developing serious health problems."

"This new report should be a wake-up call for grocery and big box retailers across the nation," said Mike Schade, Mind the Store Campaign Director with Safer Chemicals, Healthy Families.  "We found 62% of Kroger's cans tested positive for toxic BPA.  As the largest grocery chain in the country, Kroger should be leading the way by developing a timeframe for phasing out and safely substituting BPA in all of their canned food."

”While some families are fortunate to have access and means to purchase fresh produce, many communities across America have no choice but to buy canned food lined with toxic BPA,” said Jose Bravo, coordinator of the Campaign for Healthier Solutions. “Some families live in a food desert where fresh food simply isn’t available, or they can only afford the cheap food sold at dollar stores. These communities, people of color and low-income families are already exposed to toxic chemicals more frequently and at higher levels than the average American. The use of toxic BPA in canned foods means that families will sit down to a double serving of harmful chemicals.”

Food manufacturers refused to tell us what chemicals were in their cans, so we reverse engineered and tested them ourselves.
— Jeff Gearhart, HealthyStuff.org research director

Tell Kroger, Meijer & Campbell's: It's time to can BPA. These food industry leaders have the power and the moral responsibility to get toxic chemicals like BPA out of food packaging.
Take Action!

Read the complete report and search the database of findings.
Read More

What is BPA? What is the problem with BPA? BPA is a synthetic chemical that is recognized as endocrine-disrupting because of its effects on hormones, including estrogen. The scientific evidence linking BPA exposure to harm in humans is growing...
Read More
IMPORTANT NOTE: HealthyStuff.org ratings do not provide a measure of health risk or chemical exposure associated with any individual product, or any individual element or related chemical.