BUYER BEWARE: Bisphenol-A and Regrettable Substitutes Found in the Linings of Canned Food 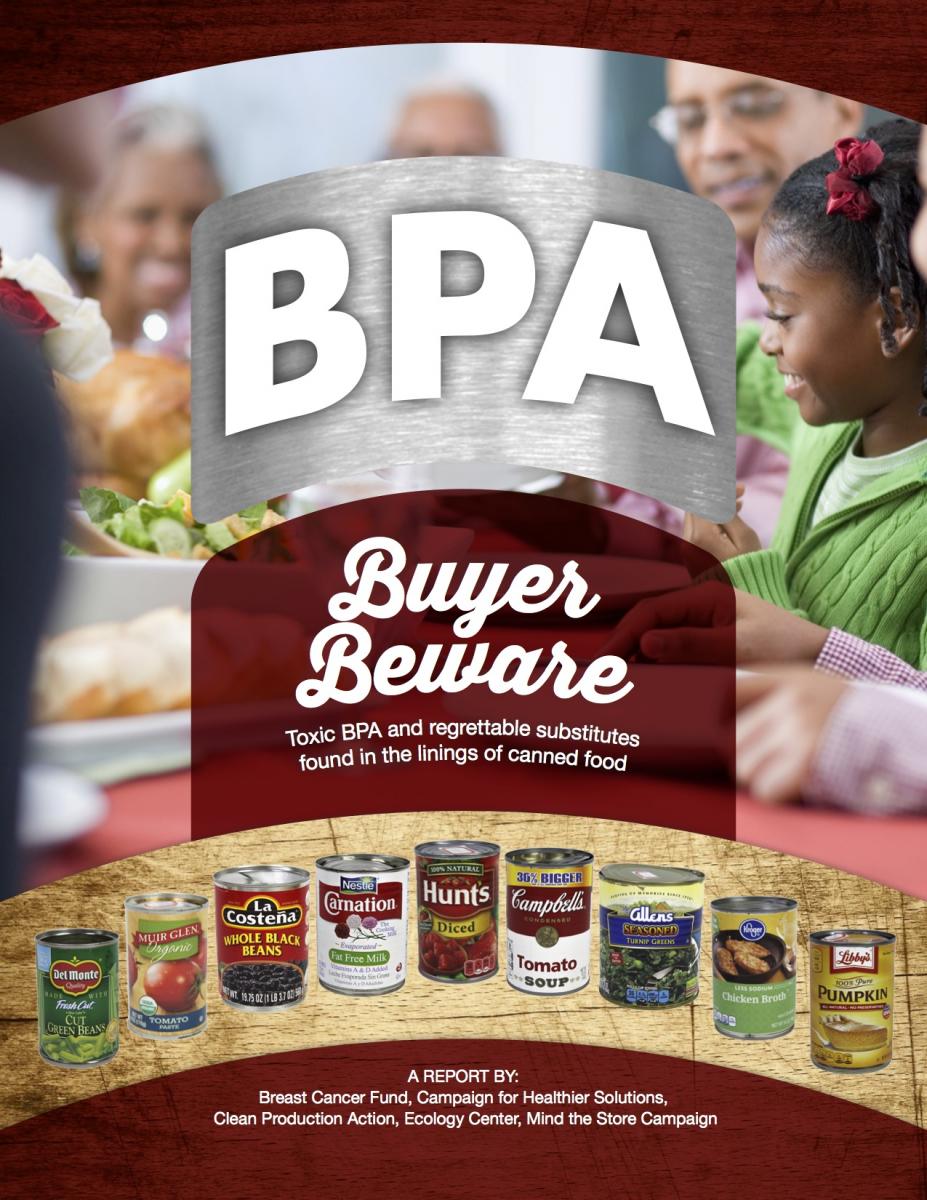 Bisphenol A (BPA) is a toxic, endocrine-disrupting chemical that negatively impacts our hormonal systems, contributing to a host of harmful health effects. Hundreds of scientific studies have linked extremely small amounts of BPA, measured in parts per billion and even parts per trillion, to an increased risk of breast and prostate cancer, infertility, type-2 diabetes, obesity, asthma, and behavioral changes including attention deficit disorder. It is likely that people are exposed to BPA from canned foods at levels that are compromising our health.

This investigation consolidates and builds on the evidence presented in previously released reports on BPA in food packaging by performing three important tasks:

A collaboration of non-governmental organizations (NGOs) throughout the United States and Canada participated in this product-testing investigation conducted by the Ecology Center. These were our goals:

NGOs collected canned food for testing and also surveyed well-known national food brands, grocery stores and big box retailers. This report analyzed the interior coatings and lids of 192 cans containing vegetables, fruits, soups, broth, gravy, milks and beans. Canned food was collected in 19 U.S. states (see appendix in the full Report) and one Canadian province. The Cans Not Cancer and Mind the Store campaigns, along with Environmental Defence (Canada), also surveyed leading national brands and the largest retailers of canned food to find out what policies they have in place to phase out the use of BPA-based epoxy and to avoid regrettable substitutions.

Our findings were alarming. We expected that the explosion in consumer demand for BPA-free packaging would have resulted in swifter action by canned food brands and retailers. However, 67 percent of the cans tested (129 out of 192) contained BPA-based epoxy in the body and/or the lid.

“BPA free” May Not Mean Safe

Our investigation raises the concern that retailers and brands could be replacing BPA-based epoxy with regrettable substitutes. Identifying the safety of BPA alternatives is challenging, given the limited FDA review and approval of packaging additives and the highly protected trade secrets in this product sector. Further, there is very little data in the published scientific literature regarding the health effects of BPA epoxy replacements, nor is this data publicly available from the FDA.

Five major coating types were identified among the 192 cans tested: acrylic resins, BPA-based epoxy, oleoresin, polyester resins, and polyvinyl chloride (PVC) copolymers. We know very little about the additives used in these compounds to give them the properties that make them stable and effective can linings. Our research does demonstrate that there are multiple formulations of most of these compounds, but there is no way to determine the specific chemicals used or how they are produced.

We found that 18% of retailers’ private-label foods and 36% of national brands were lined with a PVC-based copolymer. This is clearly a regrettable substitute, because PVC is a polymer made from vinyl chloride, a known carcinogen.

Similarly, many of the acrylic linings included polystyrene, a plastic made from the styrene monomer which is considered a possible human carcinogen. All plastics contain some level of residual or unreacted monomer. We found that 39% of cans had a polystyrene-acrylic combination. Data is not publicly available to indicate at what level monomers like vinyl chloride or styrene migrate from the can linings into food. For the other coating types, the lack of safety data and unknown additives mean we have no reliable data attesting to the safety of these compounds.

The continued presence of BPA — and potentially unsafe alternatives — in the lining of canned foods has resulted in ongoing hazardous exposures to workers, low-income populations, pregnant women, children and other vulnerable populations.

When It Comes to Labeling, It’s Anyone’s Guess

All Foods Are Not Created Equal When It Comes to Cans

Food companies choose coatings for their cans in part based on properties of the food. For example, tomatoes, which are highly acidic, react with oleoresin, causing an unpleasant taste. Our findings illustrate the complex can lining requirements posed by different types of foods:

All food categories had at least some cans coated with BPA-based epoxy, reflecting the fact that this coating type, unlike the alternatives, is used in all types of food.

The corn and peas category was the least likely overall to contain BPA-based epoxy, either as a single coating or in combination with another coating, and the most likely to contain oleoresin, a plant-based substitute

Canned milks (including evaporated, sweetened condensed, and coconut) also had a high frequency of BPA-based epoxy (85% of bodies, 45% of lids).

The continued presence of BPA — and potentially unsafe alternatives — in the lining of canned foods has resulted in ongoing hazardous exposures to workers, low-income populations, pregnant women, children and other vulnerable populations.

This report is meant to serve as a wake-up call for national brands and retailers of canned food who are jumping from the frying pan into the fire by elimi-nating BPA and potentially replacing it with regrettable substitutes. Consumers want BPA-free canned food that is truly safer, not canned food lined with chemicals that are equally or more toxic.