FTIR spectroscopy is a well-established method for identifying unknown materials. FTIR has been used for decades in thousands of applications, including criminal forensics and analyzing polymeric coatings like those used in food cans (Manfredi 2004, Biles 1999, Socrates 2001).

A Thermo Scientific Nicolet iS5 Fourier Transform Infrared (FTIR) spectrometer was used in attenuated total reflection (ATR) mode with a diamond crystal. Can coatings were scraped off from the interior of the can body using a metal instrument. Pieces of removed coating were placed on the ATR sample stage and a spectrum was obtained from 4000-450 wavenumbers. This procedure was repeated with coating from the can’s top lid, since the coating type sometimes differs on body and lid of the same can. Thus two spectra were obtained from each can.

To avoid cross-contamination, the ATR and metal instruments were thoroughly cleaned with isopropyl alcohol after each spectrum was obtained.

We used a custom spectral library, developed in our lab, to analyze the 192 cans for this report and the 73 cans included in the database that were not part of the study.

The major coating types were identified by first searching in commercial spectral libraries to find similar polymers. With the exception of BPA-based epoxy resin, the commercial libraries did not contain the exact coating formulations found in the cans we tested. We, therefore, examined our spectra for good overlap with key peaks in general polymer types. For example, can coatings that we termed “styrene-acrylic” showed certain peaks that matched characteristic peaks in polyacrylate and polystyrene polymers.

Within each of the major coating types (except for oleoresin) we observed subtle differences between some of the spectra. This indicated different chemical compositions within the major categories. We gave each subtype a name, listed in Table 1, and used a representative spectrum of each subtype for our custom library of can coatings. In most cases, we did not determine the chemical differences giving rise to the slightly different spectra of the subtypes. The subtype differences are likely due to different monomers and/or crosslinking agents and/or additives such as stabilizers. Information about each subtype is summarized belowTable 1. 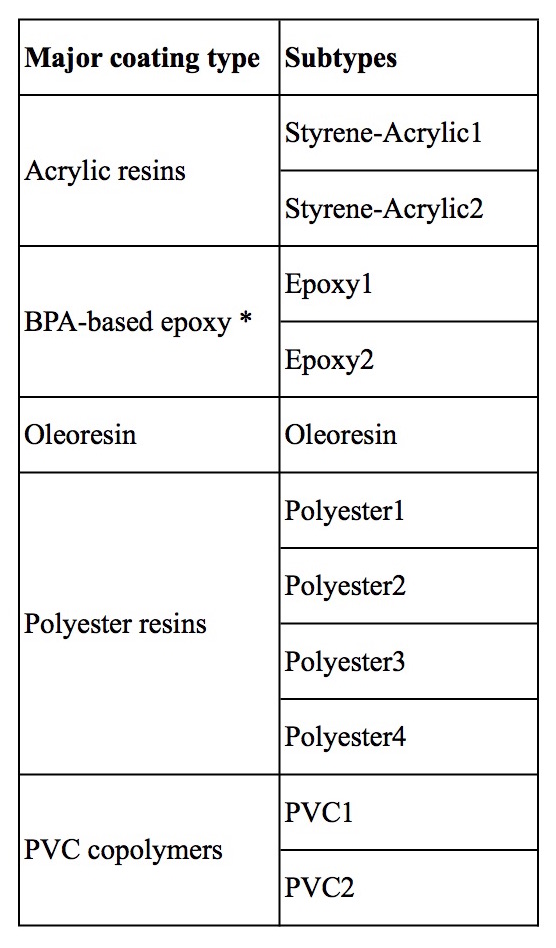 Example of a BPA-based epoxy can coating spectrum

Can Coatings and Subtypes

Styrene-Acrylic1 and Styrene-Acrylic2 are cross-linked co-polymers of polystyrene and a polyacrylate along with other unidentified constituents. These two subtypes differ in certain infrared peaks, probably indicating different monomers and/or cross-linkers, while sharing key features of both acrylic resins and polystyrene.

Styrene-Acrylic1 has a peak near 1535 cm-1 that may indicate an amine.

Acrylic3 was identified in only a few cans and only in combination with two other coating types: BPA Epoxy1 and PVC2. Acrylic3 shares features of acrylic resins with the two Styrene-Acrylic subtypes, but lacks a key peak for polystyrene, indicating it does not contain polystyrene as a copolymer.

BPA Epoxy2 is very similar to BPA Epoxy1 but lacks a few small peaks. BPA Epoxy2 has a weak peak near 1540 cm-1 that may indicate an amino functional group. Amines and amino resins, including melamine-formaldehyde resins, are sometimes cross-linkers for BPA epoxies.BPA Epoxy1 is a low-epoxide resin, as determined from the infrared spectra of cans with this coating type, based on a prepolymer called BADGE (bisphenol A diglycidyl ether) and cross-linked with an unidentified chemical, possibly a phenolic resin. “Epoxy-phenolic” coatings include formaldehyde as a precursor and have been commonly used in cans. We did not determine whether the can coatings we tested contained formaldehyde.

We determined that these coatings are almost certainly based on BPA and not on another bisphenol chemical. The coatings exhibit two peaks at 1362 and 1383 cm-1 that are characteristic of the gem-dimethyl group in monomeric BPA. The gem-dimethyl group remains in the polymer as part of the chain after BPA reacts, so the peaks are seen in the IR spectrum of the epoxy. If a different bisphenol was used, such as bisphenol AF or bisphenol S, that gem-dimethyl would not be present.

A few bisphenols other than BPA do have gem-dimethyl groups, such as bisphenols G and P, but also contain other functional groups that would significantly alter the infrared spectrum of the resulting polymer.

Spectra from coatings inside Eden Organic cans of beans did not match any polymer types in the commercial libraries, but showed characteristics of plant oils. This observation combined with Eden Foods’ longtime transparency about their use of oleoresin in bean cans led us to conclude that these spectra represent oleoresin, which is a coating that includes plant oils. Petroleum-based oils may be combined with plant oils to make oleoresin. We have not determined the detailed chemical structure of oleoresin or the monomers used.

Unlike the other polyesters, Polyester3 has a fairly strong peak near 1534 cm-1 that may indicate an amine. Polyester resins may be cross-linked with melamine-formaldehyde resins or with polyisocyanates.

Polyester resins are not the same as polyethylene terephthalate (PET) plastic. PET was not identified in the coatings we analyzed.

PVC1 and PVC2 are polymers containing polyvinyl chloride (PVC) as a major constituent. Both PVC subtypes contain an unidentified co-polymer in addition to PVC. A co-polymer can serve as a plasticizer. The plasticizers in these coatings were not identified. The peaks in PVC2 suggest it contains an acrylic polymer and/or a plasticizer that PVC1 does not contain.

We verified the presence of chlorine in these coatings by obtaining XRF spectra from several coatings. Chlorine concentrations measured by XRF were over 20% by weight, consistent with PVC. We determined the material was thermoplastic —as opposed to the other coatings, which are thermosets and do not melt—by melting samples of the coating at about 160 degrees C.

As described above, for each can, one spectrum was obtained from the body and another from the lid. Each spectrum was compared against our custom library to find the best match. We used a multi-component search for spectra that did not clearly match one of the coating types. Those can coatings were found to consist of two or three different coating types together. A common combination, for example, was a BPA epoxy plus a styrene-acrylic resin. We did not investigate whether these combination coatings were blended or layered on the can interior.

Every spectrum was inspected visually to verify a clear match to the result.