Harmful plasticizer chemicals in some food service gloves leach into food upon contact, and children and pregnant women are most vulnerable to harmful health effects 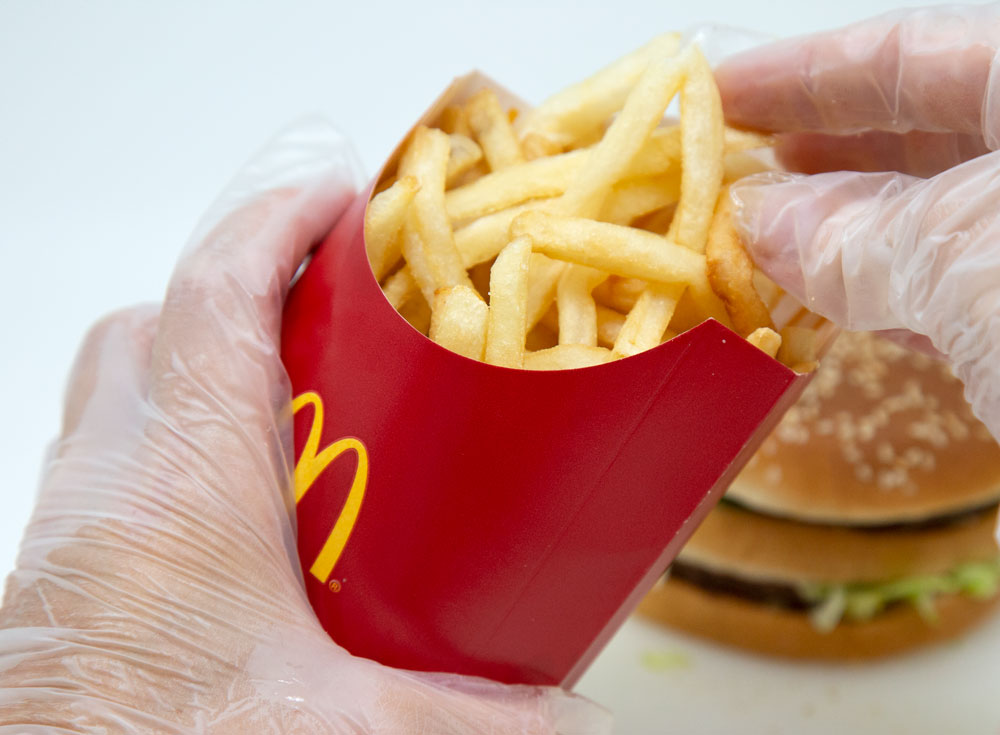 Some gloves from Wendy’s, Burger King, and McDonald’s were found to contain phthalates, according to the report by the Coalition for Safer Food Processing & Packaging, a national alliance of public health nonprofits. The health advocates were encouraged to find that gloves sampled from Panera Bread, Starbucks and Subway restaurants were using safer polyethylene gloves.

The coalition is calling on McDonald’s, which dominates the restaurant sector in annual sales, to be a market leader and protect its customers with a public commitment to end all use of vinyl food service gloves—the only way of preventing phthalates in some vinyl gloves from contaminating food.

“Vinyl, or PVC, is widely known as the ‘poison plastic’ because it creates toxic chemical hazards across its lifecycle—from production to use and disposal— including dangerous chemical additives that leach out of the plastic,” said Mike Belliveau, executive director of the Environmental Health Strategy Center, leading member of the coalition. “It’s time for restaurants to take off the toxic gloves, and do away with vinyl gloves altogether. Polyethylene gloves are safer, widely available, and affordable--and where permitted, simply washing hands with soap and water has been proven just as safe as wearing gloves.”

“We found that the same brand of vinyl glove is not always free of toxic phthalates. Some samples of the same brand had phthalates, while others didn’t. Over two-thirds of the restaurants we visited used vinyl gloves, which means that any of those restaurants could potentially get a box of gloves that happened to contain phthalates,” said Lauren Olson, Science Campaign Director at the Michigan-based Ecology Center, which led the gloves testing.

Food is most Americans’ primary route of exposure to phthalates, and research has found that dining out and eating fast food is associated with higher phthalate levels in people's bodies. The American Academy of Pediatrics released a policy statement in 2018 calling for U.S. government action to keep these chemicals out of food, and Europe, Japan, and the state of Maine have all banned or restricted phthalates from food contact materials, including food-handling gloves, because of the strong science linking exposure to these chemicals to harmful health effects.

“In my research, I discovered that dining out and eating fast food is linked to higher exposure to phthalates,” said Dr. Ami Zota, ScD, MS, of the Milken Institute School of Public Health at George Washington University. “My research has also found that African-American and Latino communities may be particularly vulnerable to phthalate exposures from processed and packaged food. We must do better for all children and families, and eliminate sources of phthalates, such as vinyl food-handling gloves, that could contaminate food.”

It is impossible to ensure phthalates aren’t contaminating restaurant meals through contact with PVC gloves unless restaurants stop using PVC gloves altogether. There is no way to know if a PVC glove contains phthalates, absent screening every new box of gloves for phthalates with specialized testing equipment.

PVC is a hard plastic that requires plasticizers, like phthalates, in order to be made flexible enough for use as gloves, and these chemicals comprise a full third of a PVC glove, on average. Plasticizers are not chemically bound to the glove and are contaminating our food, as the Coalition’s 2017 study on phthalates in dairy products confirmed. The production and disposal of vinyl also uses or releases numerous other highly hazardous chemicals including chlorine gas, ethylene dichloride, vinyl chloride, dioxins, mercury, asbestos, and PFAS.

The phthalates discovered in foodservice gloves were DINP and DIDP (both of which require a warning label under California’s Proposition 65), DPHP, which is currently unregulated, and DEHP, a known hormone-disrupting chemical which is subjected to the most bans globally. DINP, DIDP, and DPHP all show harmful health effects similar to DEHP. This is the first time that DPHP has been documented to be used in food-handling gloves.

The report also found that many vinyl gloves contain DEHT, or DOTP, a plasticizer chemical intended to replace ortho-phthalates. New research suggests DEHT may be a hormone-disrupting chemical, and human exposure is widespread and increasing. Like all plasticizers, DEHT is also not chemically bound to the glove and can leach into food, which is a major source of exposure to this chemical. For these reasons, the Coalition does not recommend DEHT as a replacement for ortho-phthalates.

Because polyethylene does not require any plasticizer chemicals, it is a safer alternative to vinyl food service gloves.

For the report, researchers at the Ecology Center tested 60 vinyl gloves from 31 distributors that import most of the food-handling vinyl gloves for use in restaurants and processing into the U.S. An additional 12 vinyl gloves were obtained by restaurant supply stores to test gloves that might end up touching an Americans’ food. Twelve organizations obtained an additional 63 gloves (of a variety of materials) from 56 locations of 15 popular fast-food restaurants in 14 states.

These same restaurants received poor grades for their chemical safety policies and practices on the November 2018 Retailer Report Card by the Mind the Store campaign, and health advocates sent these brands letters requesting that they take public action to keep phthalates out of food-contact materials, including gloves, in June 2018.

In total, 123 food-handling gloves, including 101 vinyl gloves, were tested, making this the largest study of phthalates in foodservice gloves ever undertaken.

Ecology Center is a non-profit environmental advocacy organization established in 1970 in Ann Arbor, Michigan. The Ecology Center develops innovative solutions for healthy people and a healthy planet in four primary areas: Environmental Health, Sustainable Food, Energy & Climate Change, and Zero Waste. This work is accomplished through educating consumers to help keep their families healthy and safe, pushing corporations to use clean energy, make safe products, and provide healthy food, providing people with innovative services that promote healthy people and a healthy planet and working with policymakers to establish laws that protect communities and the environment. For more information visit www.ecocenter.org and follow @Ecology_Center

“We found that the same brand of vinyl glove is not always free of toxic phthalates. Some samples of the same brand had phthalates, while others didn’t. Over two-thirds of the restaurants we visited used vinyl gloves, which means that any of those restaurants could potentially get a box of gloves that happened to contain phthalates.”
— Lauren Olson, Science Campaign Director at the Ecology Center