-
+
Which car seat is the best choice? Which is the worst choice?

Remember: Always properly use a car seat for a child in a car, regardless of our chemical test results. These are critical safety devices. Our test results can't tell you which seat is the best choice for you, since that depends on your budget and other needs, but can shed light on differences in chemical content among the choices. Based on the presence and hazard of flame retardant chemicals identified in our tests, we have grouped the seats into low concern, moderate concern, and high concern. The seats categorized as “low concern” do not contain any added chemical flame retardants. Unfortunately, these are high-end seats that won't fit many people's budgets. That's why we are calling on car seat companies to make lower-cost seats that don't contain added flame retardants. We are confident it can be done. An affordable car seat should not come with a chemical exposure cost. 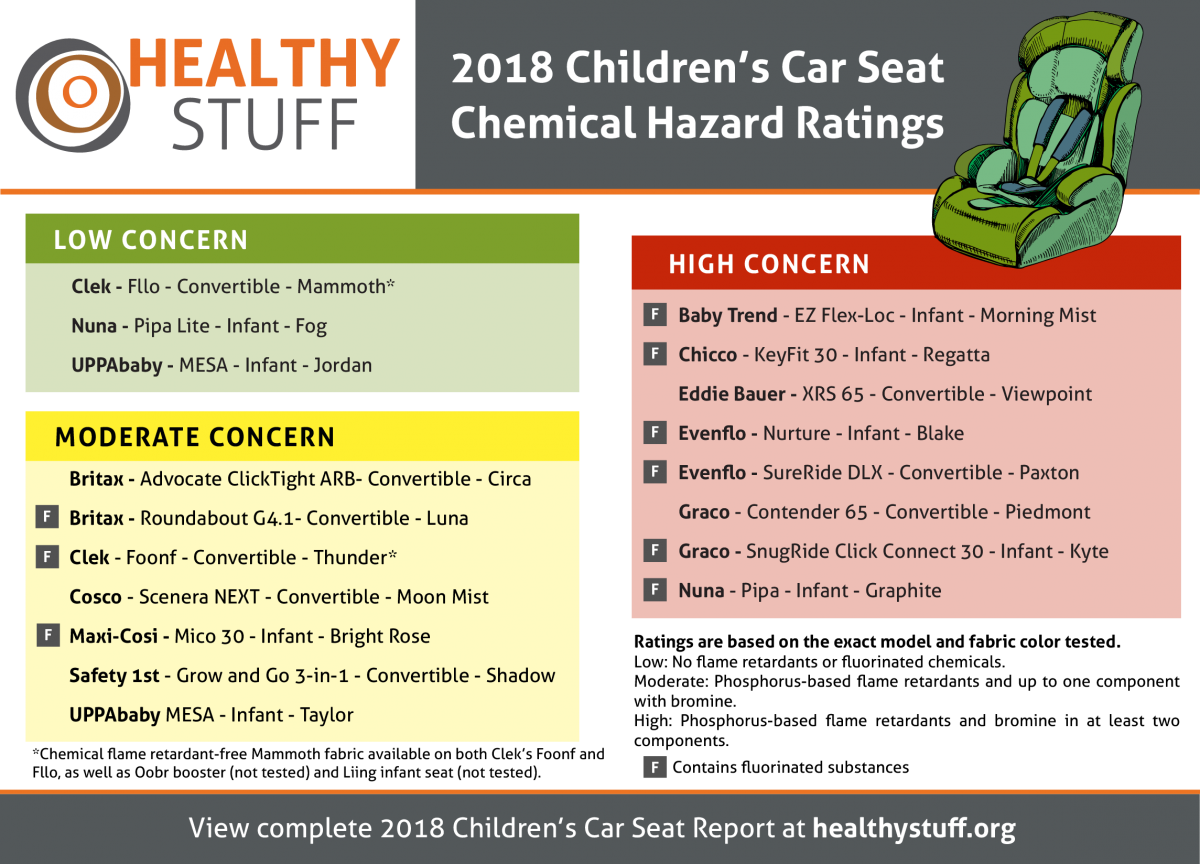 -
+
The car seat I have is similar to a model tested in your study. Can I assume it will have the same results?

Our test results are valid only for the specific product tested, the model and fabric. We cannot provide information on car seats that we have not tested. We encourage you to contact the company and manufacturer to ask about what chemicals have been added to a specific car seat. If the company won’t provide this information, let them know that consumers want and deserve to know what they are buying.

-
+
Why are flame retardants required?

Chemical flame retardants aren’t required. However, they are a relatively inexpensive way to meet the federal flammability standard.  Automobile interiors and child car seats are required to meet material flammability standards according to Federal Motor Vehicle Safety Standard (FMVSS) No. 302: Flammability of Interior Materials. The test requires that a flame cannot move more than 102 mm per minute or stops burning in under 60 seconds at a distance of less than 51 mm. The purpose of the standard is to reduce deaths and injuries from fires that start inside the vehicle, including from matches and cigarettes. It applies to any interior material within 13 mm of the airspace, which includes and is not limited to: seat cushions, seat belts, floor coverings, and padding and crash-deployed elements that are designed to absorb energy in a crash. FMVSS 302 was established in 1976 and children’s car seats were first included in the requirement in 1981.

Yes. Three seats in the 2018 study did not use chemical flame retardants (FR) and passed flammability tests, and more such seats are being developed. Manufacturers of these seats use materials that are either naturally flame resistant such as wool or specially made to pass the flammability standard. In 2017 UPPAbaby unveiled an infant seat, the MESA Henry, as the first FR-free seat designed to contain no added FRs yet still meet automotive flammability standards. UPPAbaby has since added another FR-free seat, the MESA Jordan, which we tested and confirmed to be FR-free in 2018. Our 2018 testing also confirmed the Nuna Pipa Lite (we tested Fog color) and Clek’s Mammoth wool fabric (available on both Fllo and Foonf models) to be free of added flame retardants.  All of these seats are in the high-end price range. We are calling on car seat companies to make lower-cost seats that don't contain added flame retardants.

-
+
Can federal regulations be changed?

The car seat industry and Ecology Center have petitioned the National Highway Transportation and Safety Administration (NHTSA) to require children’s car seats to comply with an alternative fire safety standard that is more appropriate for a children's product.  Our research has shown it is possible to make child car seats that pass FMVSS 302 without adding chemical flame retardants; however, modifying this standard would make an industry-wide change to such seats easier.

-
+
How do flame retardants affect human health and our environment?

Many flame retardants are bioaccumulative, persistent and endocrine disruptors. Bioaccumulation means a chemical accumulates in the organism at a rate that is faster than it can be lost by catabolism and excretions. Persistent chemicals do not break down in the environment to smaller and more benign chemical structures.  They are able to persist for long periods of time and may be transported via the air, water, and organisms. Endocrine disruptors interfere with normal hormone action. They may increase or decrease hormone production or mimic a natural hormone. For example, certain phthalate plasticizers mimic estrogen and show evidence of contributing to certain genital abnormalities like hypospadias in baby boys. For example, they can mimic or block hormones and can increase or decrease hormone production. For more information about endocrine disruption, check out The Endocrine Disruption Exchange.

No.  As our research has shown, a range of materials can be chosen for children’s car seats and vehicles that meet FMVSS 302 without chemical flame retardants.

Data on vehicle fires indicates that most fires begin in the engine of the vehicle, not in the interior. A report on highway vehicle fires from 2008-2010 by the Department of Homeland Security found that of 1,250 injuries from 194,000 vehicle fires, 9% were related to cigarette use. Most fires, 61%, are from the engine, running gear, or wheel area of the vehicle. Smoke inhalation can be a major cause of fatalities.

Flame retardants may also contribute to injury when they burn. The reason is twofold. Combustion can cause chemical transformation to highly toxic organic chemicals. Also, one study found that when polyurethane foam containing the brominated flame retardant pentaBDE burned, it produced twice as much smoke, seven times as much carbon monoxide, and 70 times as much soot as foam without flame retardants. It also found that a typical foam containing pentaBDE provided only a three-second delay in ignition compared to the untreated foam.

No. These fabric treatments are a design choice. Stain- and water-resistant treatments are now available without PFAS. Also, washable upholstery covers are available in some products and this should be adopted as an industry-wide standard.

-
+
What’s the problem with PFAS-based treatments?

PFAS have been shown to migrate from fabrics such as baby bibs into simulated sweat and saliva during simulated abrasion and mouthing.  And they are contributing to a water-contamination disaster around the globe. During manufacturing and disposal, PFAS treatments pollute groundwater and surface water (rivers, etc.) with “forever chemicals” that are showing up in drinking water and in nearly all humans tested.

PFAS chemicals that contaminate water and soil travel long distances without breaking down. The chemicals build up in our blood, liver, and kidneys and may contribute to diseases of those organs as well as cardiovascular disease and osteoporosis. Studies also suggest a host of negative impacts on fetal and child development.

We urge car seat companies to stop using PFAS treatments and instead make car seat covers easy to remove and wash, or at least use a fabric treatment that contains no PFAS.