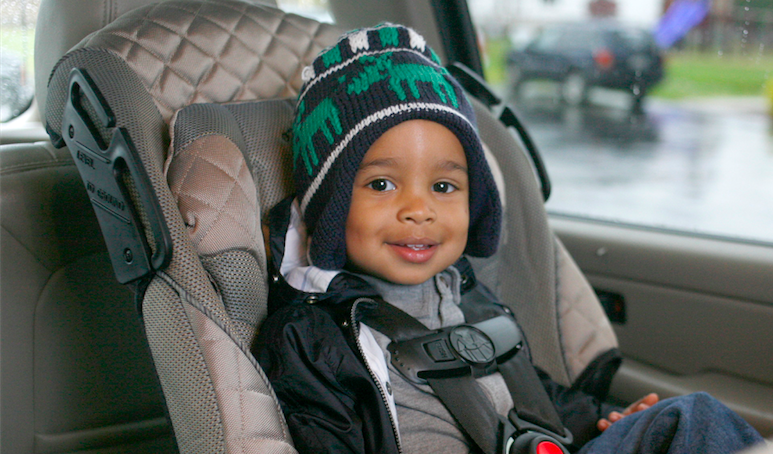 The Ecology Center has tested child car seats periodically for ten years, tracking changes in chemical additives. Car seats are a required product in which babies and children typically spend hours per day. The flame-retardant (FR) chemicals historically used in car seats include known carcinogens, hormone disruptors, and developmental toxicants. Exposure occurs through contamination of air and dust. Safer alternatives are available, and while our testing has shown trends away from the worst chemicals, companies can do much better.

In fact, one company has answered our longtime call.  UPPAbaby unveiled a new seat for 2017 specially designed to contain no added FRs yet still meet the flammability standards. To our knowledge, the MESA Henry will be the first car seat free of added FR chemicals on the market.

In this study, we analyzed flame retardants and other chemicals in fifteen infant and toddler car seats purchased in 2016, including two from the United Kingdom. The brands are BabyTrend, Britax, Chicco, Clek, Cosco, Diono, Evenflo, Graco (two models, one from the UK), Joie (from the UK), Maxi-Cosi, Nuna, Orbit, Recaro, and Safety 1st. The seats represent a broad price range and about half were brands also tested by our team in 2014.

It is to be understood throughout this report that 1) vehicle interiors are chemically flame-retarded to begin with and 2) that car seats provide vital crash protection, and children should always ride in a properly installed seat, regardless of chemical hazard.

Our study shows that the car seat industry continues to change its approach to meeting flammability standards. The industry continues to shift away from halogenated FRs and to implement materials innovation that will eventually allow flammability standards to be met without hazardous chemicals. Currently, however, chemical flame retardants are still in widespread use in car seats. Highlights of the report:

To our knowledge, this study represents the most detailed assessment to date of different materials in car seats.  Our analysis illustrates the importance of studying components other than polyurethane foams in upholstered products.

As long as car seats are subject to the federal flame standard for cars, the best approach is to redesign car seats so that hazardous chemicals are not necessary. Our studies have shown manufacturers decreasing the use of chlorinated and brominated FRs in foams and increasing the use of halogen-free FRs. This is a step in the right direction. However, brominated FRs remain frequently used in car seat fabrics, and some of the halogen-free FRs such as triaryl phosphates pose health concerns as well. We now encourage companies to follow UPPAbaby’s lead by making a few material changes, such as using naturally fire-resistant wool, to avoid adding FRs.

Flammability regulations should be modified

While car seats can be designed to pass the flame test without chemical additives, this approach costs more money. Affordable car seats should not come with a chemical exposure cost.

Policy makers should consider exempting child car seats from the federal flammability standard FMVSS 302. Despite 44 years of this U.S. regulation, The National Highway Traffic Safety Administration can provide no evidence suggesting that the rule protects children in vehicle fires. FMVSS 302 has resulted in car seat makers adding many thousands of pounds of chemical flame retardants to products that infants and children are in close contact with every day.