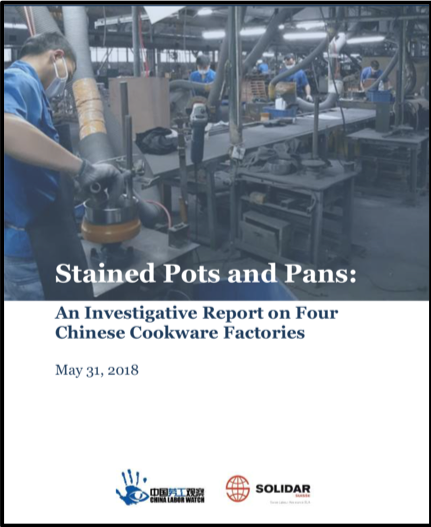 In 2016 and 2018, China Labor Watch (CLW) and SolidarSuisse conducted a series of investigations into the labor and safety conditions at five cookware factories in China's Guangdong Province.[1] [2] These facilities produce a variety of cookware, including both coated (PTFE and other coatings) and uncoated. Dozens of the most popular brands of cookware are produced in these factories, including Cuisinart, Greenpan, Walmart, Macy’s, Kohl’s, and IKEA. The findings of these investigations apply broadly to cookware production in China and highlight the need for improvement in worker rights as well as health and safety generally. The 2016 report found:

“The industry is plagued by illegal and unfair working conditions that include labor contract violations, a lack of paid leave or required insurances, mandatory overtime without overtime pay, unpaid wages, fines on workers, poor occupational safety measures, and insufficient living conditions. Cookware manufacturing is a dirty business, full of metallic dust and toxic chemicals. Yet factories fail to prevent exposure, properly train workers, or provide sufficient protective equipment. At factories investigated for this report, workers in some departments were covered in metallic dust.”

A subsequent 2018 report by CLW on the same plants found improvements have been made in the factories which were previously investigated. However, the report continued to cite that “rights abuses are still rampant in the cookware industry. Wages, for example, are extremely low, occupational safety is insufficient and many other violations remain unchanged.”

Among the issues still noted in 2018 were a lack of sufficient pre-job safety training and inadequate labor protection equipment, including personal protective equipment like respirators and eye protection. The employers “fail to provide adequate labor protection and safety training, leaving [workers] susceptible to various occupational health issues and injuries.” The labor groups have called for increased transparency, monitoring and accountability from the cookware brand companies.

Cuisinart-branded skillets, such as the Cuisinart Green Gourmet and Cuisinart Classic Nonstick Skillet tested by the Ecology Center, constitute one of the name-brand products of China’s Guangdong Master Group Stainless Steel Company.

Workers at the Guangdong Master Group factory polish skillets, apply adhesive to the interior, then spray Quantanium onto the adhesive.  According to the Society for the Plastics Industry pamphlet, “All fluoropolymer resin processing (e.g., extrusion, molding, spray coating, and wire and cable coating) will release gases, vapors, or fumes that may be harmful to human health, if exposures are high. 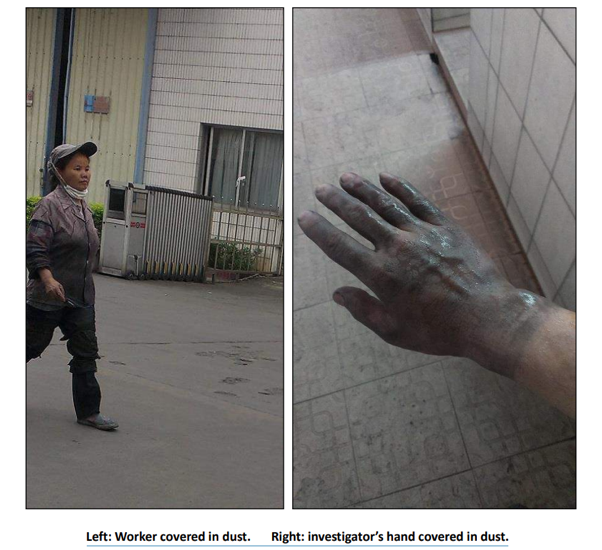 “Spraying of dispersions may generate a mist that might be an additional exposure route. Ventilation, personal hygiene and personal protective equipment (PPE) like gloves goggles, face shields, lab clothing, protective footwear, etc. are commonly used to protect from these exposure sources.”[4]

Many of these protections were not in place in 2015 or 2018 according to an investigator who took a job in the factory. The author bore witness to plant conditions in the 2016 China Labor Watch (CLW) report, Dirty Frying Pans.

The coating department contains chemical risks. The substance typically used during the non-stick coating process is polytetrafluoroethylene (Teflon), which is poisonous to human health. The coating substance used at GMS is apparently supplied by a company branded ILAG. While CLW did not confirm if the substance was in fact Teflon, this is the chemical broadly used in manufacturing of non-stick pans. Given the toxicity of the substance, workers are not sufficiently protected. Many do not even wear masks. Workers also said that they did not know what the chemical is but think it is dangerous.

Ilag (now owned by Showa Denko) is a competitor to Whitford/PPG that also manufactures fluoropolymer coatings for cookware (See Case Study II, Appendix A). Cookware factories in China have licenses with different coating suppliers and apply formulations as specified by customers like Conair.[5]  In 2020 (through November), Conair imported over 373 tons of “Cuisinart” and “Hard Anodized” cookware, including skillets, from China.