Thousands of Michigan children are lead poisoned each year and nothing is done about it… because no one even knows it’s happening. Not even their families know because their children haven’t been tested -- and families don’t even know that they should be tested. In 2019, more than 4,000 children in Michigan were identified as lead poisoned (had blood lead levels ≥5 micrograms per deciliter); that’s 2.9% of the 143,140 tested children in Michigan.

And yet, three out of four children under age six in the state do not get tested for lead exposure. By those numbers, there could be over 12,000 unidentified lead poisoned kids in the state. That’s why we need universal testing: all Michigan children at one and two years of age should have their blood tested for lead.

There is no safe level of lead exposure, which can have lifelong impacts. Even though lead was banned from gasoline and paint decades ago, it has not gone away. Many of our homes still have lead paint (70% of Michigan houses were built before 1978, when Congress banned lead-based paint).

Childhood lead poisoning damages the brain and nervous systems, harming a child’s development and causing lasting health problems. Exposure to lead is associated with some of the difficult issues facing Michigan families and schools today: ADHD, decreased IQ, reduced ability to pay attention, decreased academic achievement, and poor adaptivity and problem-solving skills. Exposure to lead can also cause other health problems, such as hypertension and kidney development. 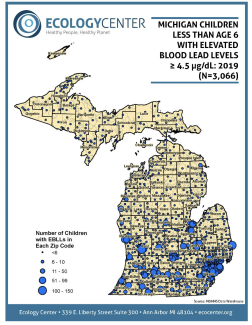 Lead is still in the soil (from deposits from car exhaust, factory smokestacks, and exterior paint). And many cities, including but not limited to Detroit, Highland Park, Hamtramck, and Benton Harbor, still have lead service lines for drinking water. Children are exposed to lead through the drinking water, paint, dust, and soil in our communities.

Michigan Department of Health and Human Services recommends all children younger than six who are “at risk of lead exposure” be tested. How do doctors find “at risk” kids? Questionnaires are often used. But questionnaires may not ask about all of the possible causes of lead exposure.

Additionally, parents may not know all the answers, like how old the house is or if there are lead pipes leading to the house. And some physicians may not even give parents the questionnaire.

We know that babies and toddlers are most at risk because they explore their world by putting their hands, toys, and everything else in their mouths. That’s why universal blood lead testing of ALL one- and two-year old children would capture this critical at-risk group of kids, no matter where they live in Michigan or what type of health insurance they have.

The CDC has collected data showing that children enrolled in Medicaid don’t have higher rates of elevated blood lead levels (EBLLs) compared to children not enrolled in Medicaid. But Medicaid enrolled kids are primarily the ones getting tested. Our current system is failing Michigan children with private health insurance or no insurance.

Michigan would not be the first; ten states and Washington D.C. require universal testing of all children for lead. In these states, testing rates range from 55% to over 80%. Once lead poisoning has been identified in a child, steps can be taken to prevent further exposure and help eliminate lead from the body. Programs and resources are available to families to eliminate the source of lead exposure. But families, medical professionals, and state agencies can’t address the problem of lead poisoning in a child if they don’t know it’s there.

As a part of a bipartisan 10-bill package to prevent and remediate lead poisoning, Rep. Witwer (Delta Township) has introduced Michigan House Bill 5416. This bill would increase the age for children enrolled in Medicaid or MIChild to receive annual lead screening tests from three years old to six years old. This is a start in the right direction. The passage of this bill would protect more children. But, it still leaves out non-Medicaid enrolled children. Lead poisoning affects all demographics and all geographic areas in the state, from rural to urban to suburban areas. It’s time for Michigan to get the lead out of kids, but we need universal testing to find it.