Detroit Incinerator an Assault on Justice

Mayor Mike Duggan has taken recent actions, both quiet and public, that signify his commitment to the health and well-being of Detroiters. He spoke to a large audience at the Mackinac Policy Conference chronicling how racist policies at the federal and local levels disenfranchised and impoverished Detroit’s African American families. He committed to do better than his predecessors, promising “One city for all of us.” Then without much fanfare, Mayor Duggan signed onto the U.S. Conference of Mayors’ Climate Protection Agreement, committing the city to reducing carbon emissions to below 1990 levels. One action--shutting down Detroit’s trash incinerator--could help Mayor Duggan make good on both of his recent commitments. 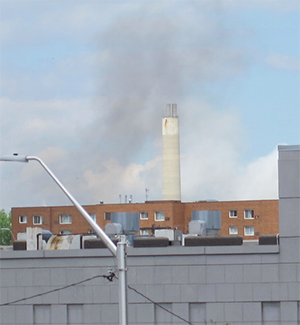 The Detroit trash incinerator, one of the largest in the world, is a prime example of environmental racism. Here is a facility that pumps out carbon monoxide, sulfur dioxide, nitrous oxides, and particulate matter daily, and whose operators have violated the Clean Air Act 379 times since January 2015. All of these pollutants contribute to climate change. And they all contribute to health concerns of local residents. Residents who are predominantly African American and low income.

The fact that much of the trash comes from whiter, more affluent communities, such as Oakland County and the Grosse Pointes, exacerbates the inequity of the situation. This concern and others prompted several organizations to join with residents to form Breathe Free Detroit, a new campaign aimed at closing the Detroit incinerator. In February we began working with residents who were concerned about pollution from the incinerator. On a blustery night this past March, almost two hundred residents packed a public hearing to object to the Michigan Department of Environmental Quality’s slap-on-the-wrist fine and bulk discount for repeated violations by the corporation that runs the incinerator.

Residents stood up and spoke about how they--or their children--suffer as a result of the pollution, and dozens more submitted written comments to the same effect. Community members described chronic asthma so severe that it caused sleepless nights, loss of work and school, and even emergency room visits. Nurses spoke about providing emergency treatment to small children, opening their airways so they could breathe normally again. And having their hearts break when their young patients were released only to be exposed to the very same asthma-inducing pollution when they returned home.

Residents cited research from the University of Michigan that found air pollutants released by the incinerator cause and activate asthma and increase asthma-related hospitalizations for children. The emissions can also cause nonfatal heart attacks, irregular heartbeat, decreased lung function, coughing and difficulty breathing.

Michigan Department of Community Health (now Michigan Department of Health and Human Services) has even labeled Detroit the “epicenter of asthma”. And yet, their sister department, the MDEQ, refused to take action. After hours of testimony and three months of deliberation, the MDEQ sent letters to every person who stood up that night in March, informing them they were going to do nothing. Nothing to bring the fines to a just amount, nothing to ease the suffering of those living in the shadow of the beast.

This is why neighborhood residents are hopeful when they hear Mayor Duggan has joined the U.S. Conference of Mayors in their dedication to curbing climate change. The same pollutants that cause climate change are also coming out of the incinerator and getting into the lungs and bloodstreams of those living nearby.

Please join us in calling on Mayor Duggan to continue to stand with the U.S. Conference of Mayors who recently adopted a resolution to work towards 100% renewable energy with language that specifically excludes incineration. Burning trash is a poor way to deal with reusable and recyclable resources. Mayor Duggan can take an important step toward a cleaner, greener, and healthier “city for all of us” by closing a 30-year chapter of incineration and moving Detroit toward the zero waste practices of the future.