Environmental Education Makes a Difference, Then and Now 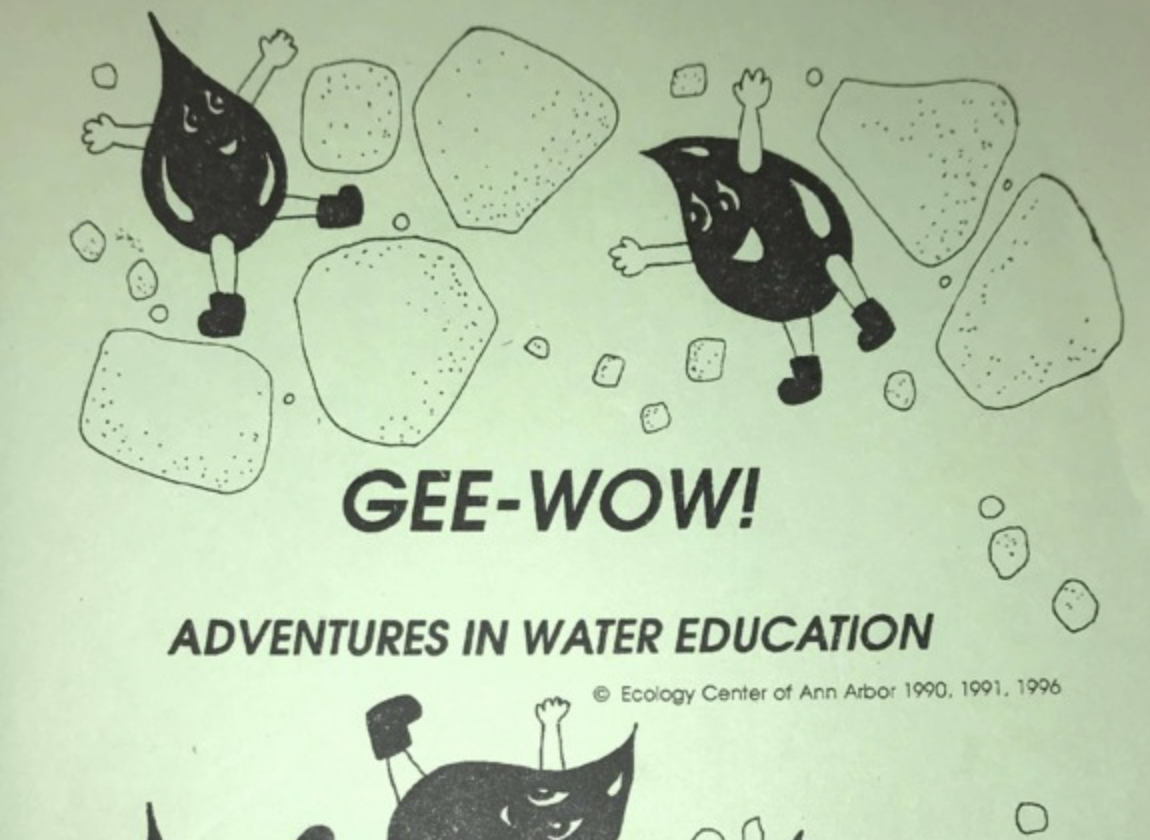 Started in the late 1980s, the Ecology Center's GEE-WOW! Groundwater program laid a solid foundation for environmental education today. The program still serves as a model to guide environmental activists in teaching young people to grapple with complex problems like the climate crisis and environmental injustice.

Beginning through a Kellogg Foundation grant, GEE-WOW! was led by a small but dedicated team that provided hundreds of interactive groundwater demonstrations during classroom visits, assemblies, and groundwater festivals. GEE-WOW!'s programming quickly expanded to include a comprehensive groundwater activity guide, an instructional video, and even a computer game. By the early 2000s, GEE-WOW! had reached over 50,000 students across seven counties in Southeast Michigan.

Since then, the Ecology Center education program has expanded to include new topics– sustainable food systems, renewable energy, green chemistry, and much more.  Yet, the zero-waste workshops still incorporate the GEE-WOW! Groundwater pollution content and continue the Ecology Center philosophy of meeting people where they are. Currently, the Ecology Center is developing new programs to prevent lead poisoning and promote cleaner air. Across these programs, the focus on student-centered inquiry and action remains.

During the 1960s, growing concerns over threats to human health and the natural world spurred an effort among activists and educators to develop new approaches to teaching young people about the environment. Unlike predecessor movements such as nature study and conservation education, environmental education strove to do more than promote respect for the natural world, rather, it emphasized urgency, social responsibility, and problem solving.

A driving force of the new environmental education movement was William B. Stapp, a professor at the University of Michigan. Working half time for the Ann Arbor public schools and half time for the university, Stapp came to believe that the future health of the environment depended on the education of its youngest stewards. Bill Stapp launched a generation of educators all over the globe, including staff at the Ecology Center.

In the spring of 1973, Ecology Center staff proposed a redesign of Ann Arbor’s outdoor education programming based on the guiding principles of  “community problem solving” and “clarifying values.” See this article for more on these early education efforts.

By the late 1970s, continual defunding of education and political attacks on environmentalism created an educational vacuum which NGOs and university faculty and students needed to fill.

A recent graduate of the University of Michigan’s School of Natural Resources and Environment and former intern at the Ecology Center, Tara Ward became the education director in the late 1980s. Through a grant from the Kellogg Foundation, the Ecology Center developed GEE-WOW and vastly expanded its educational programming and its network of district and school partners for years to come.

The Ecology Center’s environmental education program was student-centered, and action-oriented. One of the sample activities in the proposal called on students to “concoct a ‘landfill pollution’ problem by filling a small perforated trash can with solid waste and food coloring….[and] track[ing] and graph[ing] the pollution plume.” By providing students with these hands-on opportunities centered around real community problems, Ward explained that she hoped to  “empower young students to be able to change what’s around them.”

GEE-WOW! met students where they were, both literally and figuratively. Ward and her Ecology Center colleague, Ruth Kraut, traveled around southeast Michigan to present to children at their schools, Scout meetings, and 4-H groups.

Groundwater was a clear-cut focus since groundwater contamination was a critical concern for both the organization and the state of Michigan in the 1980s and 1990s. In introducing the GEE-WOW!’s K-6 activity guide, Ward began her letter to the educator with the alarming statistic that, “In February of 1990, the Michigan Department of Natural Resources identified 2,662 sites of soil and groundwater contamination in the state of Michigan alone”.

The focus on groundwater also presented a unique teaching challenge. As Ward explained in a 2019 interview, groundwater flows in the porous rocks beneath our feet, much of it unseen. As a result, students and adults alike hold misconceptions about groundwater. Increasing complexity, many activities can contaminate groundwater, such as improperly disposing of household cleaners and fertilizing lawns. Therefore, one of the key challenges of GEE-WOW! was to make groundwater issues tangible and accessible to students without oversimplifying the complex systems involved.

In this activity and other ones like it, the students would build models to investigate how everyday activities can affect the water beneath our feet. These models would be used to spark student questions that they could make hypotheses about and research.

The Ecology Center was one of several organizations awarded groundwater education grants by the Kellogg Foundation, but GEE-WOW! was the only program that continued after the grant money ran out, primarily because of the education team's ambition and innovation. In addition to creating an affordable activity guide for teachers, the Ecology Center produced an instructional video, a computer game, held groundwater festivals, and expanded their network of teacher-partners by presenting at educational conferences, such as the Michigan Science Teachers Association and Michigan Alliance for Environmental and Outdoor Education.

To Ward, creating the educational video was a particularly fun experience, and students loved it. It's Found Underground: Groundwater, Our Buried Treasure was designed to supplement groundwater lessons for upper elementary and middle school students. In November of 1991, the video received an award from the North American Association of Environmental Educators.

In the summer of 1992, the Ecology Center announced the development of Hydrotopia!, a computer game where students could make decisions about using different household products, explore their ingredients, and learn about proper waste disposal.

Throughout the 1990s, the Ecology Center continued to host Groundwater Festivals across the region, including Jackson, Ottawa, Hillsdale, and Lenawee counties and more. The festivals hosted hundreds of kids for a full day of activities related to groundwater education. A 1993 festival in Jackson, for instance, had six different stations, including hands-on groundwater models and “puddle Pictionary”.

Education that makes a difference

GEE-WOW! came of age during a pivotal transition in the field of education. As more educators began to think of schools as communities where students and teachers co-construct knowledge and deliberate about real-world issues together.  GEE-WOW! and the environmental education movement embraced this constructivist idea of education and, perhaps more importantly, coupled it with the urgent need to position students as environmental change-makers.

According to the current Education Director Katy Adams, "Education at the Ecology Center equips the students with the tools to inquire into complex problems. Teaching inquiry is a critical step in helping students become change-makers at multiple levels".

Since the GEE-WOW! name was retired in the early 2000s, the Ecology Center’s educational programming has expanded to include many topics, including sustainable food systems, renewable energy, green chemistry, climate, air pollution, and much more.  Current zero-waste workshops incorporate the groundwater pollution content developed as part of GEE-WOW! and continue the Ecology Center tradition of meeting students where they are. As of 2021, the EC is developing new educational resources to prevent lead poisoning and promote cleaner air. Across these programs, the focus on student-centered inquiry and action remains.

The Ecology Center’s Rise Up anniversary story series is made possible in part by the Rackham Program in Public Scholarship and the University of Michigan Office of Research, and research for these stories has been conducted in partnership with Environmental Justice HistoryLab at the University of Michigan. For more details on this story, check out our history archive.