The Frontier of Recycling 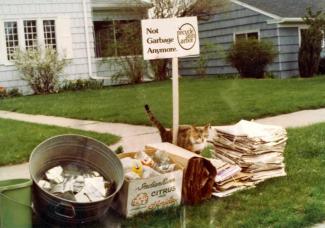 During one summer weekend in June 1970, the east side of Ann Arbor witnessed an unusual spectacle. Reported in the Detroit Free Press, over the course of two days thousands of “well-groomed housewives in station wagons, straw-hatted farmers in pickups and ragged-haired kids towing wagons” brought over 250,000 glass jars and bottles to the Arborland shopping center. Upon delivering their cargos - collectively weighing 65 tons - each received a penny per pound for clean, metal-free contributions. As a mass event, these “Glass Bottle Recycle Days” represented a pioneering effort to encourage recycling.

Establishing a glass recycling program was one of the Ecology Center’s earliest ambitions. As a young organization that did not yet have the capacity to operate on a large scale, the Ecology Center partnered with Owens-Illinois Glass Company to host the Arborland event. Its success demonstrated the possibility of creating a permanent glass recycling program in Ann Arbor.

“We can no longer continue to live in a ‘throw-away’ world where our natural resources go on a one-way trip from the land to our air, water, and dumps.” William Kopper, first Director of the Ecology Center, Michigan Daily, September 2 1970.

Inspired by this success, the Ecology Center opened a recycling drop off center in September 1970. Located at 221 Felch Street, close to the Ecology Center's headquarters in Kerrytown, the recycling center was staffed Tuesday through Saturday by Center volunteers and two Owens-Illinois employees. In nine months, the station collected more than two million pounds of glass. The volume of recyclables quickly grew beyond the capacity of recycling stations at Felch Street, Arborland, and Westgate shopping centers so  in December 1971 collection moved to a larger facility on South Industrial Highway. By 1976 the program was also accepting cardboard, paper bags, used motor oil, and computer cards in addition to glass bottles, newspapers, and metal cans.

Even as the volume of recycling increased, individuals still had to deliver their recyclable materials to the drop-off station. Environmentalists knew that more households would participate if the recycling program could travel to them. In 1978, two University of Michigan students, Jonathan Dreyfuss and Rich Ruyle, brought household collection into reality by founding Recycle Ann Arbor, a curbside recycling service run by volunteers who drove around in Ruyle’s and Dreyfuss’s pickup trucks. Dan Ezekiel, a founding member of RAA, said they wanted recycling “to be as simple as throwing away trash.” In 1982, RAA merged with the Ecology Center. Naysayers said recycling would never catch on, that people would never change the way they think about their trash, but the Ecology Center and Recycle Ann Arbor proved them wrong.

"Combining Ann Arbor’s two major recycling operations is a natural outgrowth of more than a decade of work by the two groups … The Ecology Center and Recycle Ann Arbor hope to fill a void left by the city and by local waste haulers: the need for an efficient curbside recycling service which can be a part of the routine for every Ann Arbor household.” -Jim McCargar, Ecology Report, Vol. 14 No. 3, April-May 1982.

In 1985 - only three years after merging with the Ecology Center and now working under contract to the City - RAA reached its goal of citywide curbside recycling. Statistics for the 1985-86 fiscal year reported a record 20,000 households per month participating in the program. By the mid-1980s, RAA activities included promoting the program, offering curbside pick-up, recycling drop-off, commercial pick-up and processing, and shipping. In addition to serving Ann Arbor, RAA offered complementary programs throughout Washtenaw County and beyond.

Large waste industry interests tried to block the continued growth of recycling efforts, both in Ann Arbor and throughout the country, as they feared a decline in business for landfills and incinerators. During the 1990s and 2000s, communities throughout the United States started providing their own recycling services. Some states established strong recycling policies, and these developments forced the waste industry to provide its own recycling services.

What’s happening now:  Across the United States, recycling programs have been thrown into turmoil as a result of an unregulated explosion of plastic packaging types and poor practices by global waste companies that run most of the country’s recycling programs. Overseas end-markets have also banned the low-quality recyclables generated by those programs. The resulting glut of material - and consequent nosedive in prices - has negatively impacted the domestic market.

Despite these difficulties, Recycle Ann Arbor’s focus on high-quality materials means that it has retained a strong market for recyclables. In 2020, Recycle Ann Arbor and the City of Ann Arbor are finalizing plans for RAA to rebuild the City of Ann Arbor’s materials recovery facility and move the City forward toward zero waste. Along with the country’s other major nonprofit recyclers, RAA and the Ecology Center have created a new national voice for a recycling industry with integrity -- the Alliance of Mission-Based Recyclers. What began with 65 tons of glass bottles in the parking lot of a shopping center is now celebrating fifty years of involving the community, and informing the country about recycling.