The Ecology Center strongly supports Proposal C, the proposed ballot initiative to fund affordable housing in the City of Ann Arbor. If approved, the proposal would be an enormous step forward to address housing segregation, health disparities, and housing insecurity, and homelessness in the region. It would also be a giant step forward in the local community's efforts to address the climate crisis, air pollution, and public health.

If passed, Proposal C would raise approximately $6.3 million per year for 20 years and would support the development of 1,500 affordable housing units for about 3,700 people. The units would be targeted at households earning zero to 60% of the Area Median Income (AMI), which currently corresponds in the Ann Arbor area to four-person households earning less than $60,900 per year. The plan would go a long way toward meeting the need identified in Washtenaw County's 2015 Housing Affordability and Economic Equity Analysis, which called for nearly 2,800 affordable housing units by 2035.

Housing is an essential social determinant of physical and mental health. Homelessness and housing insecurity are leading symptoms of poverty, which is a debilitating public health problem in and of itself.

But housing affordability also lies at the core of many critical environmental issues, especially in urban communities and major job centers.

In the Ecology Center works on air pollution problems, we find that one of the root causes is the long drive people make to get to their job, since they can't afford to live near the workplace.

In our work to eliminate lead poisoning, one of the root causes is that many people can only afford to live in substandard or poorly maintained housing, which can pose various health risks, including exposures to lead and other environmental threats.

In our work on fighting the climate crisis, we face the fact that, like air quality, one of the largest carbon emissions sources comes from cars' tailpipes driving people to and from work. Transportation is the #1 source of carbon emissions in the United States. That's why land-use policy — and particularly, proposals to increase housing supply — is a vital component of the City of Ann Arbor's recently adopted "A2 Zero" carbon neutrality plan.

Over the past twenty years, Ann Arbor has grown significantly as an employment center, and this change has dramatically increased commuter traffic in and out of the community. Nearly 80,000 workers now commute into and out of Ann Arbor every workday; a number projected to increase to 100,000 over the coming years. 22% of Ann Arbor's GHG emissions currently come from the transportation sector, and, on average, private vehicles are the source of 55% of a household's carbon footprint.

By itself, Proposal C will not make Washtenaw County an equitable and sustainable community- there is much to do. Still, it is an equitable step the local community can take right now. That's why we urge you to learn more about Proposal C, sign up to volunteer and support the campaign, and plan to vote YES on the November ballot. 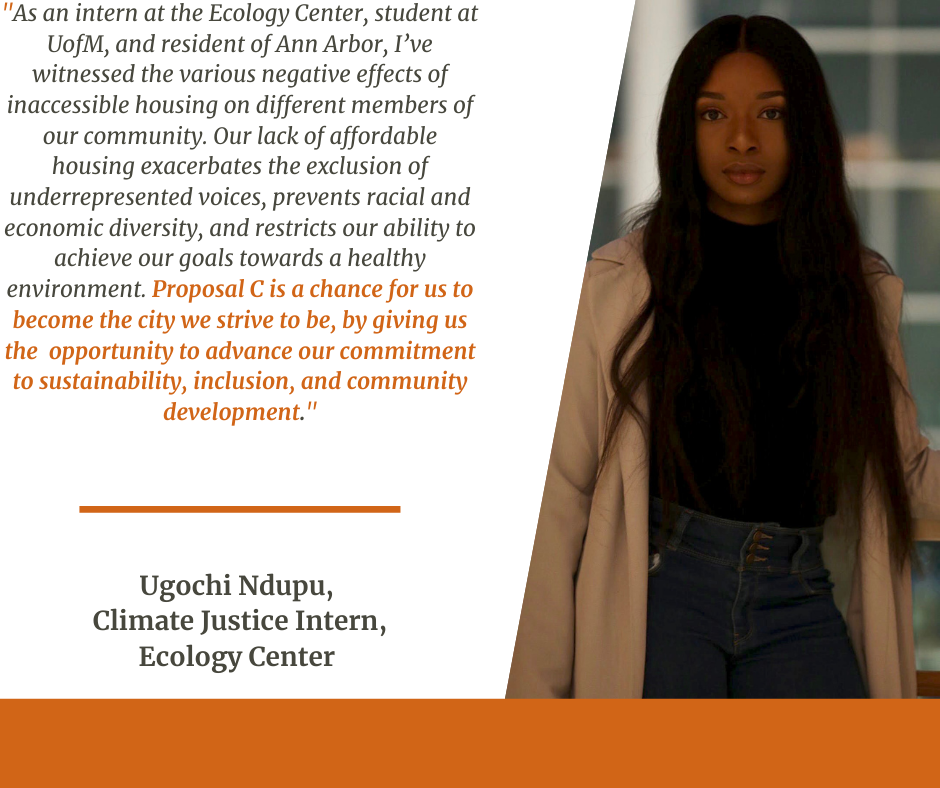