“We want people in the Midwest to know that they can support our UAW workers and buy an environmentally-friendly vehicle.”
—Charles Griffith, Ecology Center Climate & Energy Program Director

The 1978 oil embargo had hit the Midwest hard. In addition to the immediate pain of higher prices at the pump, falling demand for Ford, GM, and Chrysler’s gas-guzzling vehicles also impacted the livelihoods of thousands of automotive workers. Despite this cautionary tale, the following 25 years saw little progress in US fuel-efficiency standards.

During the 2000s, amid another period of climbing oil prices, the Ecology Center became the only Michigan-based environmental organization at the table negotiating for federal fuel efficiency standards. Since transportation accounts for roughly a third of US greenhouse emissions and most of US petroleum use, stronger standards can both reduce oil consumption and generate jobs manufacturing new, advanced vehicles. 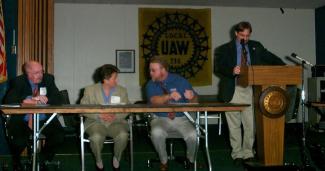 Good for workers, good for the planet

To advertise connections between fuel-efficiency, employment, and alternative fuels, a coalition of environmental and UAW leaders decided to go on tour. The “Green Machines Tour” began on August 4, 2004 as the world’s first hybrid SUV, a Ford Escape, rolled off an assembly line in Kansas City, Missouri. Charles Griffith, the Ecology Center’s Auto Project Director, referred to the tour as “an educational campaign to showcase … fuel-efficient vehicle technologies being made in the nation's heartland.” The UAW’s Legislative Director, Alan Reuther, also saw common ground between environmentalists and the union. Rather than leave innovation and production of fuel-efficient vehicles in the hands of foreign firms, growing domestic manufacture of clean vehicles would reduce dependence on oil and be good business for US unions.

Throughout the fall and into the following year, the Green Machines Tour stopped at UAW production facilities in Illinois, Indiana, Ohio, and Michigan. Tom Littlejohn, President of UAW 1268 in Belvidere, Illinois, credited the manufacture of fuel-efficient vehicles with creating thousands of well-paying jobs. Littlejohn’s local membership had grown from 1700 working one shift to over 6500 working across three shifts. In Michigan, technological improvements manufactured in southeast part of the state increased the fuel-economy of more than two million vehicles form anywhere from four to twenty percent. Green Machines highlighted the benefits of fuel-efficient vehicles among citizens, manufacturers, and politicians.

2007 Educational Video: What is a Green Machine?

In addition to technological innovation and securing jobs, a third focus of the Green Machines Tour was influencing policymaking. In December 2007, the US House passed new CAFE [Corporate Average Fuel Economy] provisions requiring automakers to meet an industry-wide average of 35 miles per gallon for cars and light trucks, including SUVs, by 2020. Announcing the first installment of revised fuel standards, the US Secretary of Transporation Mary Peters said that the plan would save America’s drivers over $100 billion in fuel costs over the lifetime of the vehicles covered by the rule, reduce fuel use by 55 billion gallons, and lower carbon dioxide emissions by over 500 million metric tons. This legislation marked the first increase by Congress in car fuel efficiency in 32 years.

Today, the Ecology Center is leading efforts in the transition to the next generation of electric vehicles statewide and in the Midwest. Recently the EC has promoted the market for electric vehicles as one approach to achieving deep reductions in greenhouse gases emissions related to the transportation sector. Much as the Green Machines Tour brought together industry and environmentalists, the “Built by Michigan” electric vehicle campaign educates policymakers and the public about the benefits of electric vehicles for the environment and the state’s economy.

The Ecology Center has also formed and is coordinating the Charge Up Midwest Campaign, a partnership of ten environmental and clean energy organizations seeking to increase electric vehicle deployment and reduce transportation-related carbon emissions throughout the Midwest region.  Campaign partners are working with a broad range of stakeholders to support actions that increase investment in electric vehicle infrastructure (i.e., more charging stations on our highways and in cities), create a more resilient and cleaner grid, and otherwise accelerate the production, sales and access to electric vehicles in the region for all Midwest residents.