For the last century, southeast Michigan has been built around cars and trucks, and transit has mostly been an afterthought.  But, a good bus and transit service is a climate solution that promotes justice and affordability, and it needs investment to work.  In the August 2nd election, voters in Ann Arbor and Ypsilanti have an opportunity to invest a just and affordable community by supporting an ambitious transit expansion proposal put forward by The Ride, the local transit agency.

The Ecology Center supports the ballot proposal, and we urge voters in Ann Arbor, Ypsilanti, and Ypsilanti Township to vote YES on the plan.  Here’s why:

Ann Arbor, Ypsilanti, and Washtenaw County are politically and socially progressive communities that claim strongly held values of justice, equity, diversity, and inclusion.  But life in the county doesn’t always live up to those ideals.  In fact, a Martin Prosperity Institute study found that Washtenaw County is the eighth most economically segregated community in the United States.

There are pockets of poverty throughout Washtenaw County, but the county’s neighborhoods with the greatest economic burden are all located in the City of Ypsilanti and Ypsilanti Township.  Many residents of those neighborhoods need transit service to get to work, to stores, to school, and wherever they need to go.

Better transit service can help make all three communities more inclusive and more affordable, since transportation is the second largest household expense in the U.S. after housing, and it’s well more costly than food or health care.  Car dependence makes the situation worse, but a good transit system connects working people – many of whom have been priced out of the Ann Arbor real estate market – with job centers.  Lots of county residents work at jobs where they cannot work remotely.

More frequent bus service also supports Ann Arbor’s new commitment to develop high-density transit corridor zoning districts, where apartment buildings are planned for development, with an expectation that residents will be able to rely more on transit. The new zoning rules set maximum parking levels for new developments, instead of minimum levels, putting an onus on future residents to rely less on car travel.  For that to work, buses need to run more frequently than they do now.

When buses run frequently enough, car owners start to rely less and less on their own personal vehicles.  A good bus system gets some people out of their cars, reducing carbon emissions.  A recent comprehensive literature review of studies on what works to get people out of their cars found that one of the most effective strategies to reduce car travel is to provide good transit service. On average, a trip by bus reduces carbon emissions by approximately 45% compared to that same trip by car.  The Ride’s long-term plan projects a 7-11% reduction in transportation-related greenhouse gas emissions from reduced single-passenger trips as bus service expands.

Better transit service is a key component of the City of Ann Arbor’s climate plan, the City of Ypsilanti’s climate plan, and it’s expected to be a key part of Washtenaw County’s plan, which is currently under development.  In addition, The Ride has a timeline for converting their entire fleet to zero-emission vehicles by 2038, which means they would have to start the transition no later than 2026 or 2027, enough time to rebuild their bus garage to equip with electric charging (or H2 fueling). 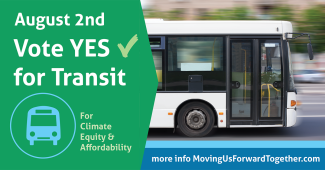 The August 2nd ballot proposal is a good deal for the Ann Arbor/Ypsilanti area.

The Ride’s proposal would create an Ann Arbor-Ypsilanti express bus route, decreasing travel time by 30%, and serving as a precursor to a future Bus Rapid Transit service.  The plan would increase the frequency of service; expand overnight service in Ypsilanti and Ypsilanti Township; provide in-person customer service at the Ypsilanti Transit Center; provide longer hours of service on weekends and weeknights; and provide capital for future improvements like bus rapid transit, zero emission vehicles, terminals, and more.

The Ride’s long-term plan can be read here, and the agency’s description of the ballot proposal is here.

The Ecology Center was a leading supporter of The Ride’s 2014 service expansion proposal, which proved to be a huge success.  We have also been championing regional transit in the four-county area of southeast Michigan, which still has a ways to go.

It isn’t easy to buck a century of southeast Michigan car culture, and build community support for great transit, but The Ride is on the verge of making it happen.  Vote YES for transit on August 2nd.

For more information about the campaign to pass the ballot proposal, or to get involved, please visit MovingUsForwardTogether.com.