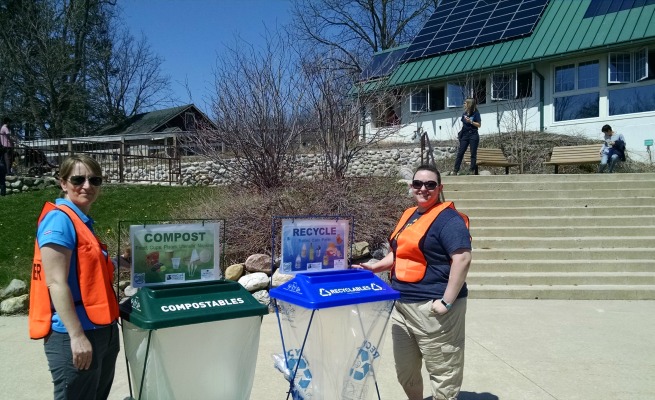 Zero Waste is a visionary solution for a sustainable future that proposes practical ways to redesign how resources and materials flow through society.

A commonsense alternative to the current waste disposal system: to promote clean production, prevent pollution and create communities in which all products are designed to be cycled safely back into the economy or environment.

Both a "back end" solution that maximizes recycling and minimizes waste, and a design principle for the future that ensures that products are made to be reused, repaired or recycled back into nature or the marketplace. Zero Waste embodies approaches that enable rapid waste reduction outcomes, breakthrough strategies rather than incremental change.

Ann Arbor has a 50% recovery rate, but has great opportunity to reduce its waste through a more comprehensive organics management program, and through better recycling in businesses and multi-family residences.  We lead partnerships to help institute those changes.  Detroit has a very new curbside recycling program, which could be greatly expanded.  The City still relies on a large and polluting municipal incinerator to dispose of nearly all its waste. We are a member of Zero Waste Detroit, a coalition seeking to develop a new business model for waste, one that stops incineration, and emphasizes recycling instead.

Statewide, Michigan recovers less than 20% of its trash, despite having the most successful Bottle Bill in the country. We work with partner organizations and the Michigan Recycling Coalition to persuade the State to invest in recycling, and eventually move toward zero waste.

The State allocated approximately $1 million from its general fund in the 2014-15 fiscal year to help develop plans to expand recycling across the state, and the Governor’s Recycling Council is scheduled to recommend major upgrades to Michigan’s recycling infrastructure later this year.  The coalition urged them to:

The new state funding and attention to recycling is the strongest support for recycling from Lansing in over 20 years.

Zero Waste Detroit Coordinator Ahmina Maxey picked apart a fiercely one-sided pro-incineration article in the New York Times with a to-the-point response, printed by the Times on January 22.  Maxey wrote that the Times article did “not address the true costs of waste incineration.  A study in The American Economic Review concluded that solid waste combustion systems have ‘air pollution damages larger than their value added.’  The air pollution (mercury, lead and so on) generated by these facilities places a heavy burden on the community.  The hidden health an environmental costs associated with incinerator pollution mean that it is not a cheaper option than recycling.  Curbside recycling and composting do not generate these same costs because they are cleaner, safer options.

“Incineration is also an environmental justice issue.  Low-income and minority communities are disproportionately burdened by these environmental hazards.  Detroit, a largely African-American and Latino community, is home to one of the country’s largest incinerators.  The facility’s emissions contribute to Detroit’s poor air quality and high asthma death rates, about twice the state average.  If the real human and environmental costs of incineration were taken into account, incineration costs would far exceed those of recycling."

Recycling is Essential Work
For Recycle Ann Arbor Curbside Driver James Lipford, the thing he likes best about his job is the community he serves. He especially values when people tell him and his colleagues how much they appreciate the work. Being safe as possible is the major challenge on his mind..

Playing the Long Game: How Detroiters Finally Won the 30 Year Fight to Shut Down Enormous Trash Incinerator
Residents fought to keep the plant from opening, and then to shut it down, for thirty years. As a health hazard and noxious neighbor, the incinerator drew protest from citizens, environmental coalitions, and Canadian leaders across the river since planning began in the mid 1970s
Recycle Ann Arbor
Zero Waste Communities
Recycling Education Events
At the Recycling Sorting Facility
Environmental Education