An Equitable and Just Transition to Electric Transportation

Now that electric vehicles are starting to take off, with sales doubling over the last two years and capturing 7% of the market nationally, the EV transition feels like it's finally happening. There are more models, covering a larger variety of sizes and classes, that will offer EV options that will meet the needs of more vehicle buyers. However, the higher sales price of most EVs will still make them a difficult choice for many lower- and moderate-income buyers.

As part of the fight for making electric vehicles affordable and accessible, the Ecology Center has allied with other partners in the environmental community, the electric vehicle industry, and environmental health organizations in advocating for additional consumer purchase incentives to level the playing field. In a letter sent to Governor Whitmer, advocates urged her to take action by including new incentives in her upcoming budget proposals. Suggested incentives include new rebate programs for new, used, and leased EVs and e-bikes; funding for transitioning school buses, transit buses and commercial trucks to electric; and expanding commercial and community charging stations for travelers and apartment dwellers.

To her credit, Governor Whitmer already proposed an electric vehicle rebate program in her last budget, but that failed to get support from Republican leaders in the legislature. Her proposal included a $2,000 rebate for purchasing a new electric vehicle and a $500 rebate for at-home charging infrastructure. When paired with up to $7,500 in federal tax credits, that’s almost $10,000 off the purchase price, which in addition to up to $10,000 in maintenance and power costs saved over the vehicle's lifetime can really add up.

But many advocates, including the Ecology Center, believe the proposal could be improved to ensure that more low- and moderate-income Michiganders can afford to purchase electric.  The letter to Governor Whitmer urges expanding the proposed rebate program to include used and leased electric vehicles, as well as offering  additional incentives for households that are enrolled in eligible public assistance programs. Additional funding proposed to transition to electric school and transit buses, as well as commercial trucks, would also benefit lower-income communities--especially those with poor air quality.

School buses, transit buses, and other large trucks are a source of dirty diesel pollution and CO2 emissions. Highways and trucking corridors sitting close to our communities expose millions of people to dangerous levels of pollution. Each year in Michigan, in addition to the transit buses and state, local, and municipal truck fleets, more than 16,000 school buses travel 163 million miles to carry children to public schools. Converting Michigan’s fleets of public school buses, transit buses, and trucks to zero-emissions electric as the Council on Future Mobility and Electrification recommends would help clean the air and benefit the economy while alleviating pollution-related health problems that disproportionately affect low-income communities and communities of color.

Convenient and accessible charging infrastructure is also essential for electric vehicle adoption. EV drivers need charging stations along the roads and highways they travel and near their homes and other local destinations. Toward that end, Michigan will be receiving $110 million in federal funding over the next 5 years to support the addition of EV charging infrastructure along seven US highway and interstate routes.  Additional incentives are also available for installing EV charging stations in homes and apartment buildings, workplaces, and other public locations as part of the several EV infrastructure programs at Michigan utilities, such as Consumers Energy’s PowerMiDrive and DTE’s Charging Forward program. Access to charging along highways can eliminate range anxiety, reassuring drivers that they can comfortably travel long distances without fear of getting stuck. It’s also essential to have charging available in communities where people live because they might not have access in their home–because they live in an apartment building or other dwelling with no place for a charger. These infrastructural additions open access to people who otherwise might not be able to balance their housing needs with the charging requirements of an electric vehicle.

But more can and still must be done.  As was noted in the Council for Future Mobility and Electrification report, the state needs a comprehensive, equitable EV plan to ensure that MI develops the charging infrastructure needed to support at least 2 million electric vehicles in 2030.  Toward that end, the Ecology Center and the Michigan Electric Vehicle Alliance (MEVA) launched the MI Clean Cars 2030 campaign with the support of more than a dozen other groups.  The campaign is urging adoption of an official target to transition to electric vehicles by 2030, and to develop the comprehensive plan that would enable the state to achieve it.  According to Kareem Scales, executive director for the Greater Grand Rapids NAACP and one of the MI Clean Cars 2030 campaign supporters, “For the average commuter, one hour per day spent in traffic equates to passively smoking 180 cigarettes per year. Anyone who has to breathe in dirty air caused by gas-powered cars is paying the price for that pollution.” The need to switch to electric is clear, and Michigan must enable policies and practices that make electric accessible for lower- and moderate-income households in our community. If we dream of a future with clear bright air and Michigan leading the nation in EV technologies, electric transportation must always be for all of us.

Now that Michigan voters have elected a more pro-environment legislature, perhaps we can do more than dream of a clean electric future, but achieve one as well. 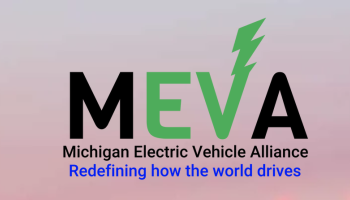 The Michigan Electric Vehicle Alliance (MEVA) is a grassroots collective of electric vehicle enthusiasts, an organization founded by Michiganders who are passionate about crafting a healthier and more sustainable Michigan and world. Taking together their diverse experiences in healthcare, automotive, and community organization, they see the potential for electric vehicles to provide clean air, address climate change, and energize our state’s economy. Their efforts are focused on ways to shift Michigan from gasoline to electric vehicles through legislation and other programs to ensure access to EVs for all.

The Ecology Center and MEVA have partnered together to launch the MI Clean Cars 2030 campaign, which advocates that the state set a target to encourage 100% of new passenger vehicle sales be all-electric by 2030. The campaign outlines a comprehensive roadmap for equitably establishing EV infrastructure and increasing access to EVs through incentives, public education, job training, and more. With the support of more than a dozen health, environmental, and social justice organizations, the MI Clean Cars 2030 campaign hopes to convince state policymakers to set an ambitious EV target and create a comprehensive plan for developing the programs and policies we need to achieve it.

If you’re interested in being part of the EV movement, MEVA is looking for volunteers excited to make a difference in their community and in the world. To help in their mission of making Michigan a leader in sustainable, electric transportation, please reach out to MEVA at [email protected].