About BPA and BPS in Receipt Paper

Businesses such as stores, restaurants, banks, airports, movie theaters, parking garages and more use thermal printed receipts and tickets (U.S. EPA, 2014). Thermal papers have a heat-sensitive layer comprised of three main components: a reactive dye, a color developer, and a sensitizer. Bisphenol A (BPA) and bisphenol S (BPS) are examples of color developers. The heat from a printer head promotes the dye to react with the developer, which produces a dark image (Minnesota PCA n.d.). 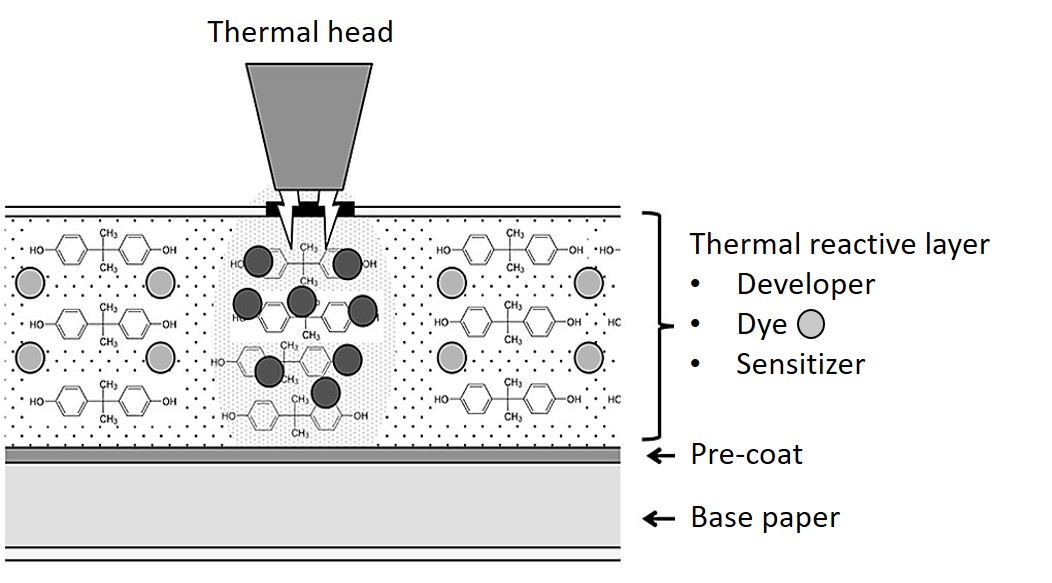 About BPA and BPS

With over 8 billion pounds produced per year, bisphenol A (BPA) is one of the most widely used chemicals worldwide. Approximately 94% of BPA is used as a base chemical in polycarbonate plastics and resin linings of food and beverage containers (Liao and Kannan, 2011a; U.S. EPA, 2014).

The heavy use of BPA is concerning because the chemical interacts with estrogen and thyroid hormone receptors, causing a cascade of biological effects (Kinch et al. 2015). Even low doses have been found to impact fetal development and may contribute to reproductive impairment, ADHD, autism, obesity, and type 2 diabetes (vom Saal et al. 2007). The most vulnerable demographics are likely developing fetuses, infants, and adolescents (Cioci, 2015), but adults are also impacted. It may be a contributing factor in premature births and early onset puberty seen over recent decades (Ehrlich et al. 2014; Ndaw et al. 2016; Qiu et al. 2016). In one study, a surprising spike in blood pressure was observed in human adults after drinking from beverage cans with BPA-based linings (Bae and Hong, 2014).

Public concern about BPA has led to its elimination in certain products, notably baby bottles and sippy cups, some plastic drink bottles, and some receipt paper. Unfortunately, the most common replacement chemical in receipt paper is BPS (bisphenol S, or 4,4′-sulfonyldiphenol)--a substitute that appears to be at least as detrimental to human health as BPA.

Evidence suggests BPS speeds up embryonic development and disrupts the reproductive system (Qiu et al. 2016). Low dose exposures of BPA or BPS in zebrafish embryos led to an increase in neurons growing in the hypothalamus and, as a result, hyperactive behaviors later in life (Kinch et al. 2015). Recent experiments with mice found that BPS exposure caused poor maternal care of offspring (Catanese and Vandenberg, 2017) and a decreased ability to lactate (LaPlante et al. 2017). Together, these findings support the hypothesis that BPS negatively impacts the brain and other organs.

In thermal paper, BPA and BPS are added in their free form, not chemically bound to the paper or polymerized. Thus the molecules readily transfer to anything touching the paper, including your skin, or paper money next to the receipt in a wallet. The potential for exposure from receipts is increased compared to the much lower concentrations of BPA and BPS found in some plastic bottles and the linings of food cans (U.S. EPA, 2010).

The chemical similarity of BPA and BPS suggests similar routes of human exposure. Indeed, the skin efficiently absorbs both chemicals (Russo et al. 2017) and several studies have shown that even briefly handling receipt papers leads to significant BPA or BPS absorbed into the body. BPS has an even greater half-life and ability to penetrate the skin than does BPA (Usman and Ahmad, 2016). One analysis found over 88% of BPS exposure for most humans comes from handling thermal receipts (Liao et al. 2012).

Dietary ingestion is another important route of exposure (Ehrlich et al. 2014). BPA and BPS from paper receipts transfer from unwashed hands to food and are then ingested (Hormann et al. 2014). People also ingest BPA when consuming canned foods lined with a BPA-based epoxy resin (Thayer et al. 2016) or drinking from plastic containers made from BPA or BPS.

Interestingly, a recent study found that BPA absorbed through the skin (e.g., handling a receipt) remained in the bodies of adults many days longer than BPA ingested via eating (Liu et al. 2017).

While virtually every person tested shows BPA and BPS in their bodies, workers such as cashiers who handle paper receipts have greater amounts of these chemicals in their bodies than the general population. Calculations of daily intake due to thermal receipts are summarized in Table 1.

Table 1. Estimated daily intakes of BPA and BPS by the general population and by the occupationally exposed. Units are nanograms per kilogram of body weight per day.

How much BPA and BPS is too much?

There is no scientific consensus on acceptable BPA or BPS intake.

The European Union classifies BPA as toxic to reproductive organs and requires the chemical to be labeled as such. The European Commission has issued a ban on BPA in thermal paper to take effect in 2020. It has also asked the European Chemicals Agency (ECHA) to study BPS.

Comparing the estimated exposures listed in Table 1 to the estimated tolerable intakes in Table 2, it is clear that employees may exceed at least the most recent European limit for BPA just from handling receipts. In a real-world scenario, workers are exposed additional sources of BPA--and BPS--throughout the day.

Some scientists who study hormonally active chemicals view the thresholds in Table 2 with skepticism, concerned they are too high. Researchers at the University of Calgary’s departments of Medical Genetics and Biological Sciences explained in a 2015 paper (Kinch et al. 2015):

“[Government agencies] rely on linear dose-response relationships and so begin compound testing at high doses, then lowering the dose to the level at which no physiological effect is observed. However, many endocrine-disrupting compounds follow alternative U-shaped dose–response curves, whereby exposure to mid-range concentrations activates physiological defense mechanisms against the compound, but at low-range concentrations, the compound mimics endogenous hormones.”

The evidence for effects on the hormone system at very low doses is growing, but this research is still at an early stage. It is possible that current thresholds are too high to adequately protect human health.