To establish levels considered low, medium, or high for the chemicals of concern (several heavy metals as well as bromine and chlorine) measured as parts per million concentrations by XRF, HealthyStuff.org consulted existing voluntary product standards as well as mandatory toy, packaging, electronics, and vehicle standards. We also evaluated recent state and federal legislation regulating consumer products. The ratings are not intended to correspond to levels known to cause health effects. Rather, they provide a relative measure of the concentration of the chemical on or near the surface of the product.

The flame retardant chemicals identified by GC/MS were not quantified. We rated each chemical low, moderate, or high based on what is known about its potential to harm human health in low doses. To establish these ratings, HealthyStuff.org consulted many published research studies as well as hazard assessments carried out by government agencies. The ratings do not give a measure of actual chemical exposure from a car seat.

Most products we rate contain chemical hazards.  Even the best of products often still contain some chemicals of concern.  However, some products, like child car seats, are products that parents have to purchase for safety reasons.  Therefore, we believe it is important to provide consumers with comparative ratings to allow them to assess the best and the worst of products on the market.

Flexible and rigid foams in car seats are commonly treated with added flame retardants and make up a large volume of a seat. Every seat tested contained comparable flexible and rigid foam components, making possible a comparison of seats based on the chemical content of their foams. We assigned 50% of the ranking score to the hazard assessment of foams. Since specific flame retardant analysis was not carried out for all textile samples from the seats, we did not include textiles in this part of the ranking.

Flexible and rigid foams in the car seats were analyzed by GC/MS to identify known flame retardants.  Specific chemicals were noted as detected or not detected in each material.  A simplified assessment of chemical hazard—low, moderate, and high concern levels—was developed by reviewing authoritative lists and the scientific literature for each chemical (see the full technical report for an assessment of each chemical).  These assessments should be considered provisional, as future research on these chemicals may refine our understanding of their specific hazards. 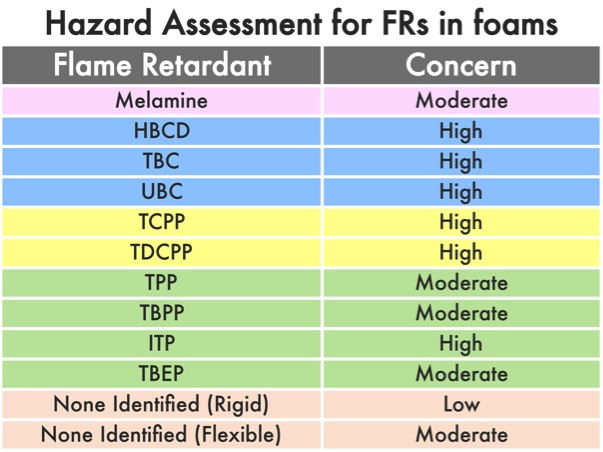 For each car seat, the highest hazard flame retardant detected in the rigid and flexible foams was identified and each foam sample was rated based on this flame retardant. 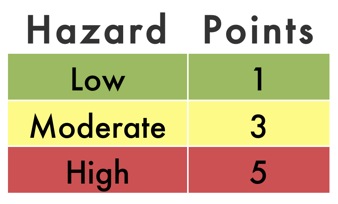 HealthyStuff.org asked car seat companies to eliminate bromine- and chlorine-based flame retardants after releasing its 2011 car seat study.  For the 2014 model seats, a combination of elemental screening for bromine and chlorine and chemical identification using GC/MS were used to establish each company’s halogen phase-out status.

HealthyStuff.org also conducted XRF screening on most major components in each seat.  These included clips, straps, EPS and EPP foam, exterior plastic, interior plastic, polyester fiberfill, PU foam and textiles. We analyzed these materials for elemental composition (percent by weight or parts per million) for over 20 different elements.  Based on existing regulatory standards and voluntary company supplier restrictions, we selected seven elements upon which to evaluate the products: arsenic, bromine, cadmium, chlorine, mercury, lead and antimony.

For each seat, the number of components containing one of these elements above the established threshold (listed below) was counted.

The total count of components exceeding these concentration thresholds was considered the point total. For example, a seat might have bromine >100 ppm in one of its foams and antimony >400 ppm in its fabric. That seat would receive a point total of two. The point totals were then normalized to a 0 to 5 point scale based on the minimum and maximum points received by seats in our sample set.