We found four different ortho-phthalates in about one out of six disposable food service gloves made of PVC. Of the 31 distributors, one of three sold gloves containing phthalates in at least one sample. We also found phthalates in gloves from three of the fifteen restaurant chains where we acquired some gloves for testing.

The presence of phthalates in vinyl gloves is inconsistent across glove distributors and restaurants, suggesting poor global supply chain management.

We found that some vinyl gloves from the same brand contain phthalates, and some do not.

Within a given restaurant chain, phthalates were found in some vinyl gloves but not in others. The production of vinyl gloves, as well as plasticizers like phthalates, takes place predominantly in China. In some cases, multiple manufacturers supply a single distributor. For example, Omar Powder Free Vinyl gloves contained ortho-phthalates in 2 out of 9 samples, all from different boxes or restaurant locations. Absent screening every new box of gloves for phthalates with specialized testing equipment, restaurants and other purchasers of vinyl food-handling gloves cannot assure that the gloves are free of phthalates. Two distributors of the 31 investigated used marketing to indicate they were free of one or more phthalates on their boxes, SmartChoice and Safety Zone, and our tests corroborated this claim.

Scientific evidence continues to grow on the hazards of and exposure to ortho-phthalates.

Because of growing evidence of reproductive and developmental toxicity and harm to brain development from human health studies and animal testing, phthalates have been widely banned from use in toys and childcare articles, and virtually all uses in the European Union (see Table 1: Regulations on Phthalates). Our testing reveals that four different ortho-phthalates are still used in plastic disposable gloves in the U.S., including the following compounds still produced in high volumes:

Human biomonitoring studies in the U.S. and Europe show that exposure to DEHP is gradually declining but exposure to these other three phthalates has steadily increased.

With the market for flexible vinyl products slowly moving away from ortho-phthalates, other chemical plasticizers are being used as safer substitutes. Like phthalates, these drop-in substitutes are used in large amounts and are continually released from products like disposable gloves, resulting in human exposure. Environmental health researchers have raised concerns that many of the non-phthalate alternative plasticizers have not been thoroughly studied, and often only by the chemical manufacturers.

Our testing of vinyl food service gloves revealed that the most common plasticizer used is DOTP (also known as DEHT). DOTP is considered a safer alternative to ortho-phthalates, although data gaps remain, particularly concerning possible endocrine disruption. New research showing the interaction of DOTP with hormone receptors underscores the need to test this chemical further.40–42 Exposure to DOTP is widespread and omnipresent.43–45 Biomonitoring conducted by the U.S. Centers for Disease Control’s National Health and Nutrition Examination Survey showed that all age groups, sexes, and ethnicities had a known metabolite of DOTP in their bodies.45

One vinyl glove contained DINCH. Human exposure to this endocrine-disrupting plasticizer is increasing, according to biomonitoring studies.45–47 Production and use of DINCH is increasing.47

Non-vinyl safer alternatives are widely available, from soap and water to safer plastics.

Fortunately, safer alternatives are widely available that prevent exposure to ortho-phthalates and non-phthalate alternatives. Since the intended function of disposable food service gloves is to prevent the spread of infectious disease, one has to consider the research that demonstrates that proper and frequent hand washing with regular soap and water works as well or even better than disposable gloves.48,49 Local or state health authorities do not universally require the use of gloves for food-handling. Where glove use is required or desired, a far safer glove material than vinyl is polyethylene, which does not require plasticizers and contains few other additives and, unlike vinyl, does not require highly toxic chemicals to manufacture or pose end-of-life concerns like toxic combustion byproducts or leaching of toxic additives. We found that restaurant chains such as Subway, Panera Bread, and Starbucks have chosen to use polyethylene food service gloves as the safest and most sustainable material of choice.

We recommend the use of bare hands washed correctly with soap and water, and when this is not possible to use polyethylene gloves. If a glove with more dexterity and heat resistance is required, nitrile gloves can be used though they are not the preferred option. We do not recommend latex gloves due to allergy potential and because some states have outlawed their use for food preparation. 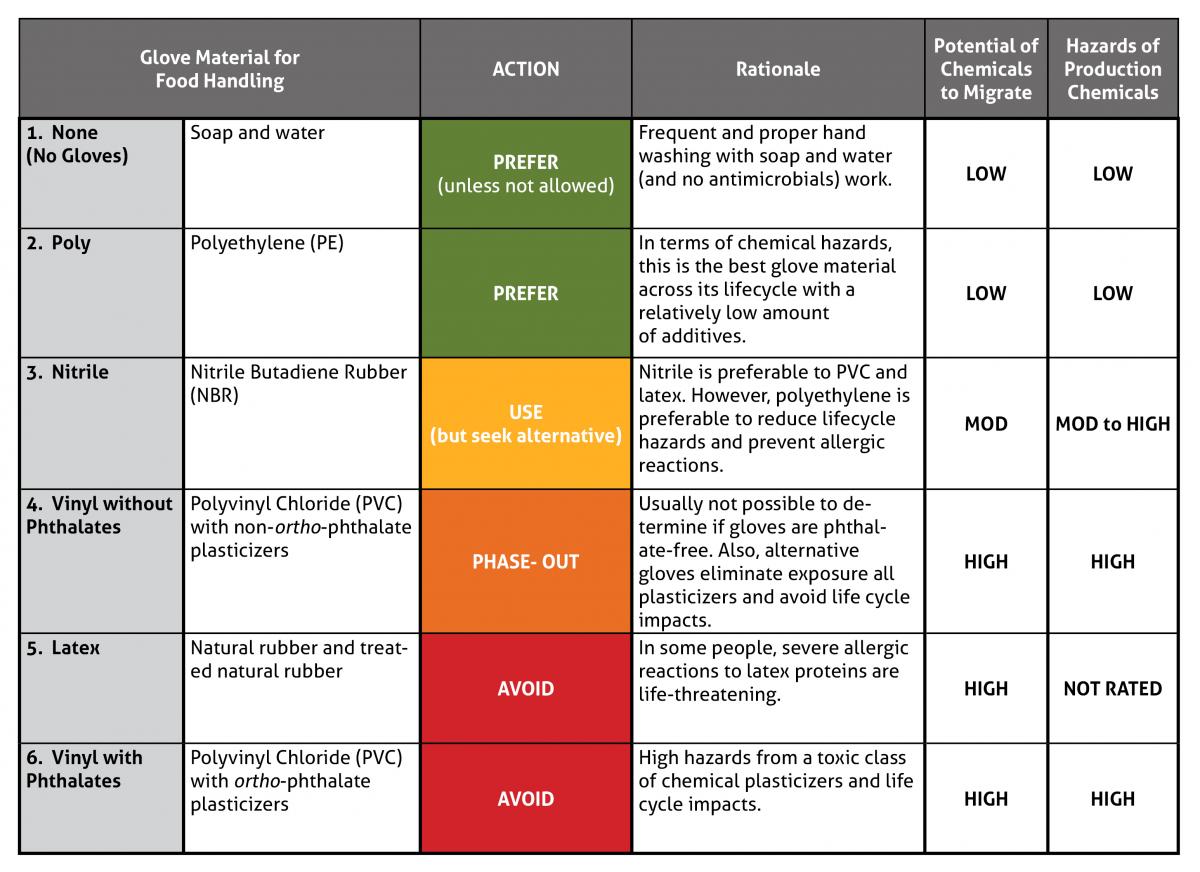