We tested 60 disposable vinyl food-handling gloves from 24 distributors. Of these, 10 gloves (from 7 distributors) contained ortho-phthalates (16.7% of gloves tested).

In all, our research teams collected 63 disposable food-handling gloves from 56 unique restaurant locations in 14 states. 41 of the gloves collected at restaurants were vinyl and 4 of these (10%) contained phthalates.

Vinyl gloves were collected from 38 of 56 locations visited, or 68% of all restaurant locations visited. If not using vinyl, the restaurants used polyethylene (20 locations, 32% of all locations) or nitrile gloves (3 locations, 5% of all locations). Panera Bread, Subway, and Starbuck’s use polyethylene gloves for food-handling (although one location of Starbuck’s reported the use of vinyl gloves for cleaning). Most McDonald’s locations used both polyethylene and vinyl gloves, with employees reporting the vinyl was used for finished food-handling and polyethylene for the grill or raw food. Table 7 shows the glove materials used at different restaurants and Table 8 is a representation of the safest to most toxic glove material choices of restaurants.

Sometimes the glove box was not available in the restaurants that were visited, and in those cases the distributor, brand, and product number are unknown. Our results show that the same restaurant chain does not necessarily have the same types of gloves at all locations. Full results are in the Appendix: Table E: Gloves from Restaurants Test Results.

Table 8: Representation of the Safest to Most Toxic Glove Material Choices of Restaurants 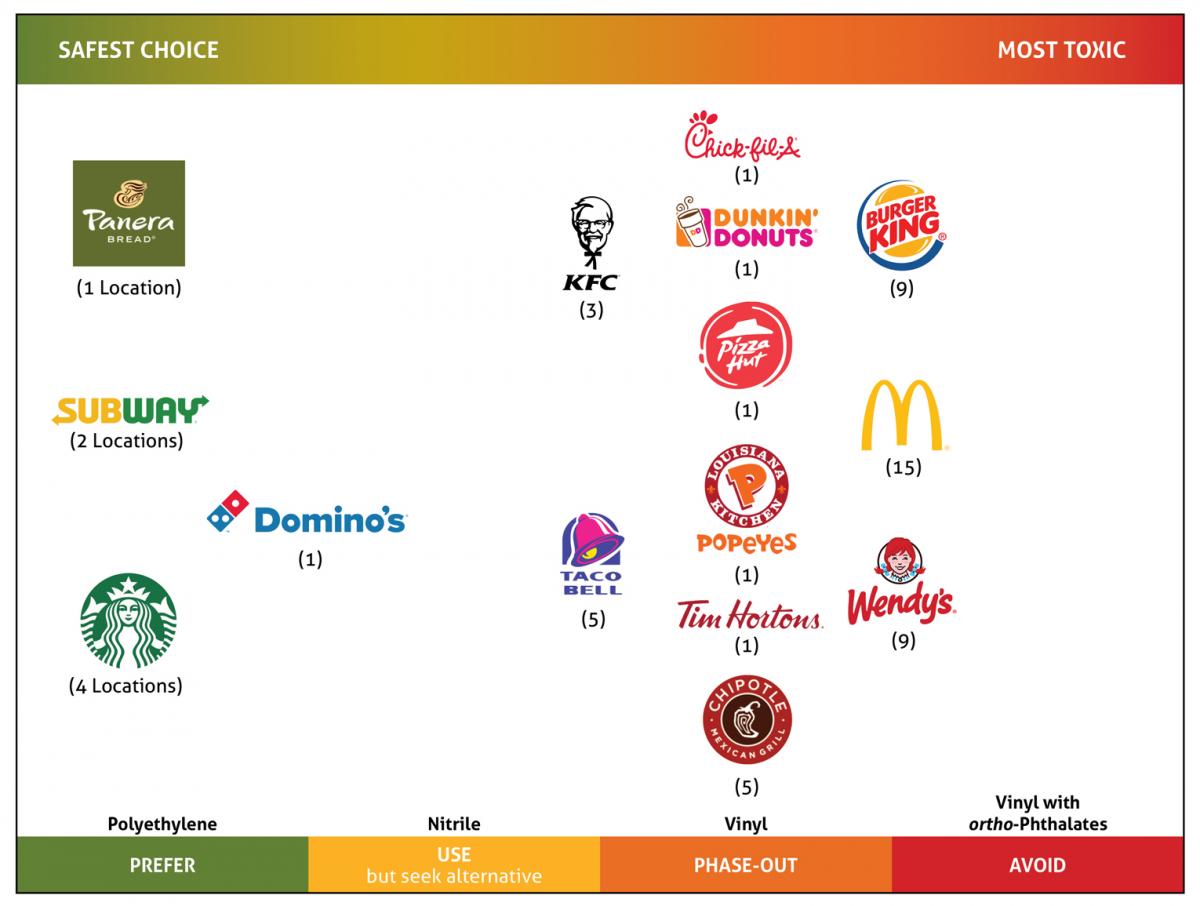 The findings presented in the table do not guarantee that all restaurant locations will be consistent.

In all, we collected 101 vinyl food-handling gloves of gloves for analysis and found that 14 of these contained ortho-phthalates. Ten of 31 distributors had produced gloves with phthalates and sourced their gloves from over 44 manufacturers, as shown in Table 9. One additional distributor produced gloves with phthalates, Intco, but they were medical gloves and the results are in Table D of the Appendix.

Table 9: Phthalate Detection in All Vinyl Gloves by Distributor

*Suppliers are manufacturing companies supplying gloves to the distributor according to data on non-medical vinyl gloves imported from 2015-2018, from U.S. Trade data compiled by Panjiva.

The most common plasticizer used was DOTP. Of the eleven phthalates quantified by GC/MS, four were found in some gloves: DINP, DIDP, DPHP, and DEHP. In most cases the phthalate compounds were found in combination, except for DPHP, which present by itself. The 100 vinyl gloves collected from distributors and restaurants fall into these categories:

Table 10: Plasticizers in Disposable Vinyl Food-handling Gloves from Distributors and Collected from Restaurants

*3 gloves of 86 without ortho-phthalates were tested by GC/MS to quantify DOTP and DINCH. The rest of the gloves were screened for the presence of DOTP and DINCH using FTIR.

See Table A: Chemical Names and Acronyms for more information on the chemicals mentioned