To obtain a representative sampling of vinyl food-handling gloves available in the marketplace, we used the Panjiva database. Panjiva tracks the importation of products into the United States by collecting data on the contents of shipping containers entering U.S. ports. We analyzed 36 months of data from Panjiva from August 2015 to August 2018. We found that there are 41 manufacturers of non-medical disposable gloves, nearly all based in China except one based in the United Kingdom. To our knowledge, the U.S. makes no disposable gloves; 32 distributors import gloves from abroad according to trade data.

Between June 2018 and April 2019, we obtained 60 types of disposable vinyl gloves for food-handling, representing 43 brands, from 22 distributors. According to data from Panjiva, these distributors account for 94% of shipments of non-medical vinyl gloves. Of these 60 gloves, we obtained 12 gloves as a convenience sample from other available sources that might supply food processors and restaurants, including restaurant supply stores and a warehouse club store. We also consulted the research report by Allied Market Research.38Table 5 lists the glove distributors we sampled food-handling gloves from for this study.

Table 5: Distributors as Identified Through Panjiva Data for Vinyl (Non-Medical) Gloves from August 2015 to August 2018

Although most distributors sell gloves under their own brand names, it appears that some provide “white label” gloves, meaning a distributor packages the gloves with another brand or corporation name. For example, Gordon Food service has no records of importing vinyl gloves, yet they sell “Gordon Foods” brand disposable gloves made in China at their stores.

In addition to gloves obtained from distributors, we collected disposable food-handling gloves used at major restaurant chains. We chose thirteen top restaurants by U.S. sales according to Restaurant Business Online plus two other chains Tim Horton’s (#62) and Popeye’s (#25) that are owned by the same parent companies.39

A Thermo Scientific Nicolet iS5 Fourier Transform Infrared (FTIR) spectrometer was used by Ecology Center researchers in attenuated total reflection (ATR) mode with a diamond crystal. FTIR is a widely used tool for determining the chemical identity of materials. Each glove was placed on the ATR sample stage, and a spectrum was obtained from the FTIR from 4000-450 cm-1. For some gloves, a spectrum was also obtained using a solvent extract. To avoid cross-contamination the ATR stage was thoroughly cleaned with isopropyl alcohol after each spectrum was obtained.

The resulting infrared spectra were analyzed visually and compared against a library of known spectra to detect the presence of phthalates and other known plasticizers. The gloves were also analyzed to determine polymer type so that all vinyl gloves were verified as being made of PVC.

Our spectral library included ortho-phthalates and non-phthalate plasticizers such as DINCH and DOTP. We visually examined the spectra to identify absorption bands unique to each chemical to avoid misidentification. 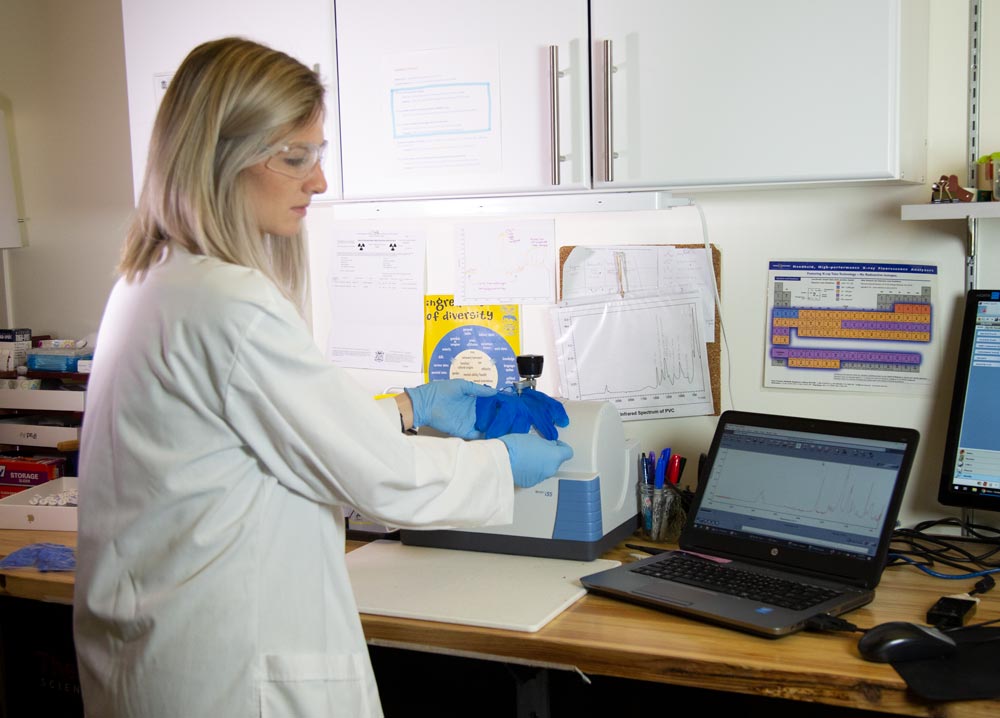 Gloves determined to contain phthalates according to our FTIR screening were sent for further analysis at Eurofins, a contract laboratory. Their test method quantifies ortho-phthalates by following test method CPSC-CH-C1001-09.4. The method uses solvent extraction followed by internal standard addition and analysis of the extract by gas chromatography-mass spectrometry (GC-MS) for phthalates and other plasticizers of interest.